From November 20th to the 22nd, the EARS Student Group hosted a virtual songwriting camp in collaboration with Escuela Nacional De Estudios Superiores Unidad Morellia. The event resulted in an attendance of 50 students with a total of eight groups. Starting on Friday, students exercised their creativity and team-building skills to write, produce, mix, and master eight innovative tracks before Sunday morning. 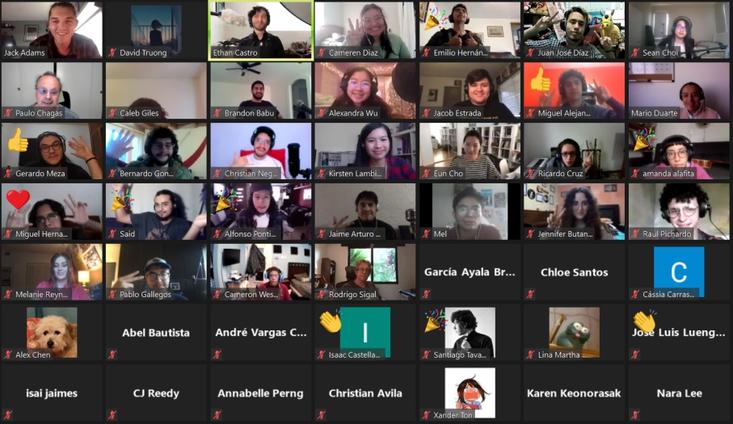 On November 16th, Jack Adams provided the EARS Student Group with an information session at 5:30 pm via Zoom focusing on basic and advanaced copyright concepts and other things pertaining to intellectual property. As mentioned by veteran music lawyer Donald S. Passman, "when you own your copyright, it's like playing Monopoly and owning all the properties on the board." This event was perfect for musical songwriters interested in acquiring complete ownership of their songs. Not only did students acquire a well-rounded understanding of what copyright is and how it works, but they were also given resources to help them properly copyright their songs. There were 9 EARS Student Group members who attended this event.

On November 2nd, Jack Adams provided the EARS Student Group with an information session at 5:30 pm via Zoom about booking and promotion. While doing live (in person) shows is not currently the norm, knowing how to effectively book and promote your shows is a necessary step to dominating the tour game (post COVID-19 pandemic). There were 11 members of the EARS Student Group who attended this event.

EARS at UCR took on a new challenge during the 2020 COVID-19 Pandemic by hosting virtual songwriting camps through the video communication platform, Zoom. Participants were separated into three groups and were given exactly two hours to create a body of work. This virtual songwriting camp proved to be extremely successful and may be the key to keeping EARS alive in the coming months while students are social distancing.

Bradley Butterworth offers a variety of courses at UCR which utilize the recording and mixing capabilities of EARS. His Audio Recording and Production (MUS023) course focuses on tracking, mixing, and mastering music performed by UCR students. Students will learn from the ground up, how to set up a recording studio, how to properly set mics and record live instruments, and how to mix and master a project using a digital audio workstation.

Bradley also teaches Concert Production (MUS257) at the EARS facility. This course is designed to train students to become live sound engineers. The class involves a live concert and recording session during each meeting. The students from UCR provide the talent for the course, while the Concert Production class will run the live sound and record the concert for the band, providing a live recording to the group at the end of each session. Skills that will be developed include, setting up a PA system, mixing monitors for the band, setting mics, mixing front of house, eq and compression settings, and live recording and mixing in Pro Tools.

Songwriting (MUS144) is another course which takes place at EARS. Students will be writing and performing original compositions each week in class. This provides an opportunity for students to show their work to their peers, to make musical connections, and to provide and receive constructive feedback on their work. Each student will work on a number of smaller assignments focusing on topics covered in class that culminate in two complete compositions for the Mid-Term and Final Projects. Covering the topics of rhythm, melody, popular chord progressions, lyric writing, improvisation, and music production, Songwriting offers beginners and advanced musicians the opportunity to be creative and expressive in a welcoming, supportive environment.

Cássia Carrascoza, Professor of Flute at the University of São Paulo, Ribeirão Preto (Brazil) presented her research on extended techniques for flute and performed contemporary pieces for flute solo and flute and electronics. 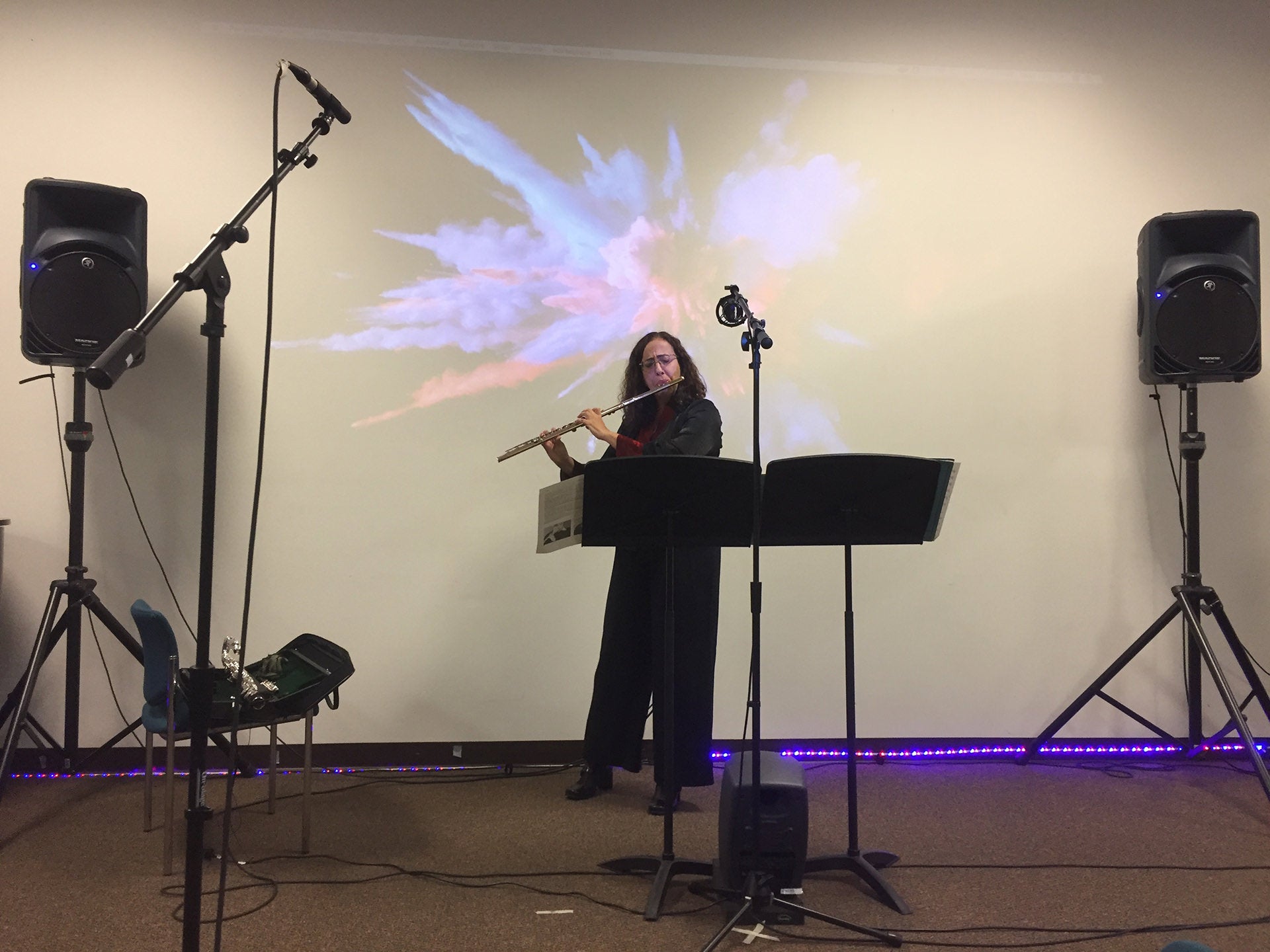 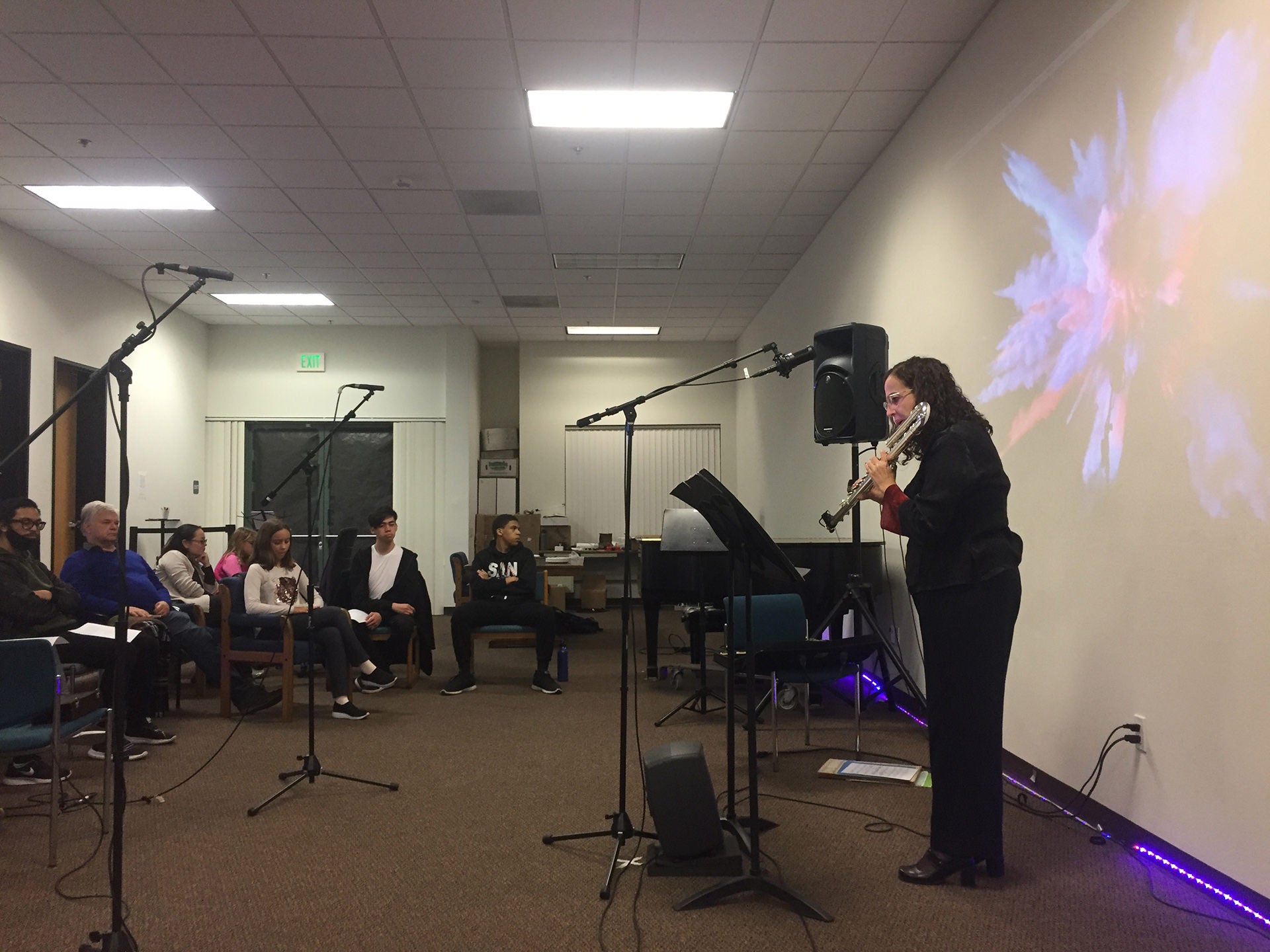 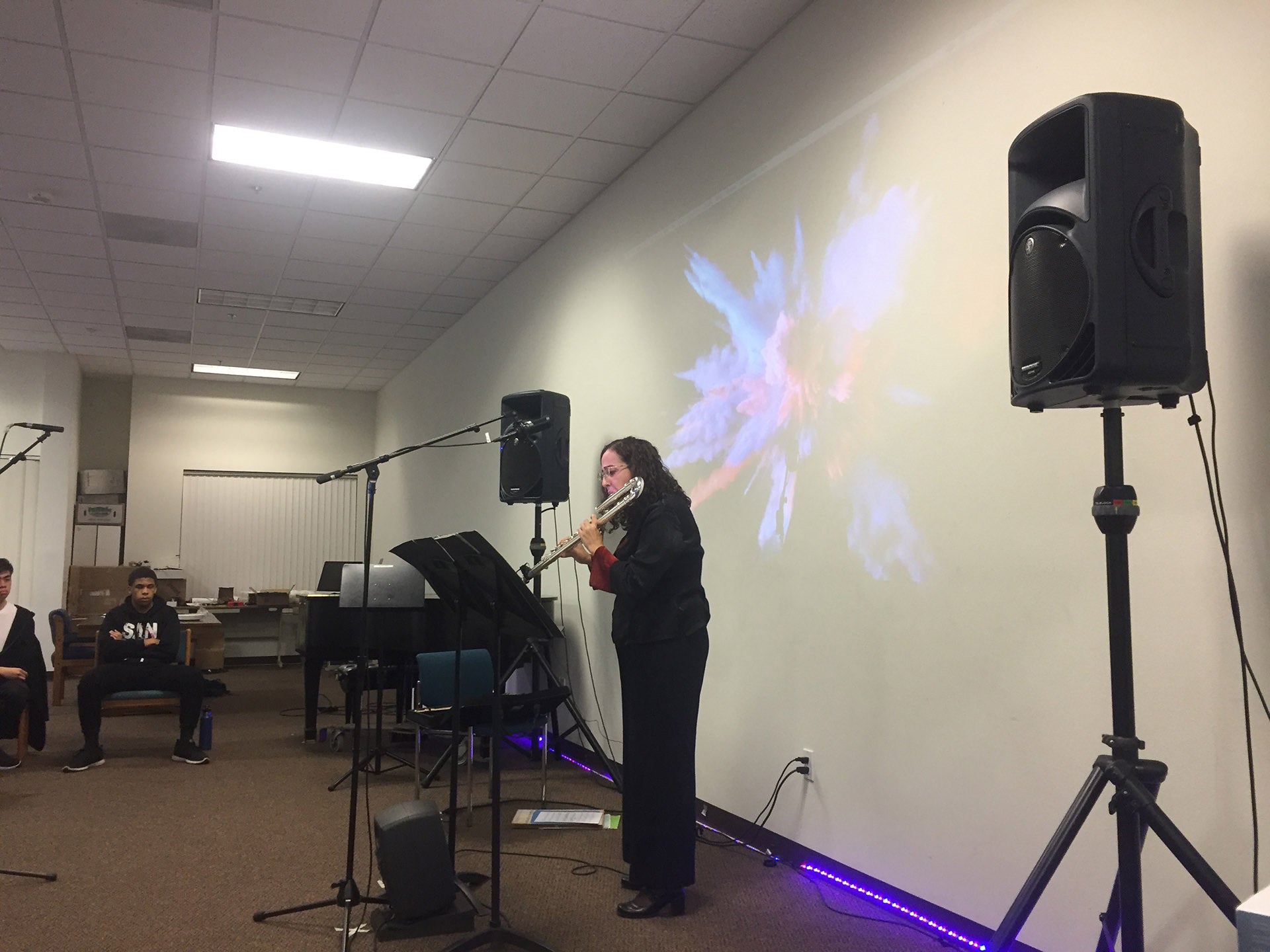 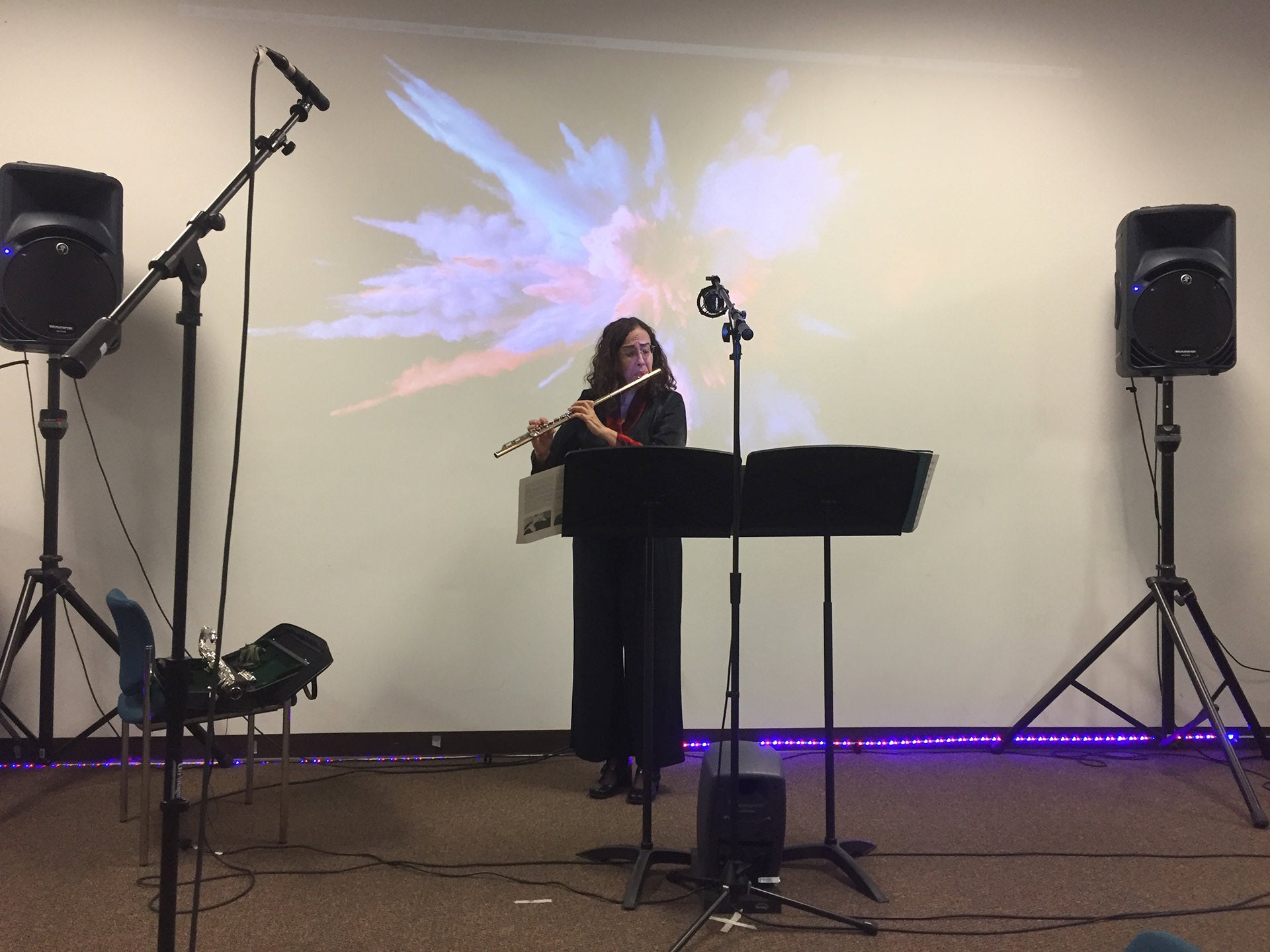 Progress in EARS’s tactile-audio research led to a presentation of the technology for the Office of Technology Partnerships’ Proof of Concept (POC) Grant fund. Our multidisciplinary team led by Dr. Paulo C Chagas, Ethan Castro, Valtteri Salomaki, and James Lin presented to over 30 entrepreneurs, investors, and UCR’s intellectual property commercialization staff the advantages of our technology. 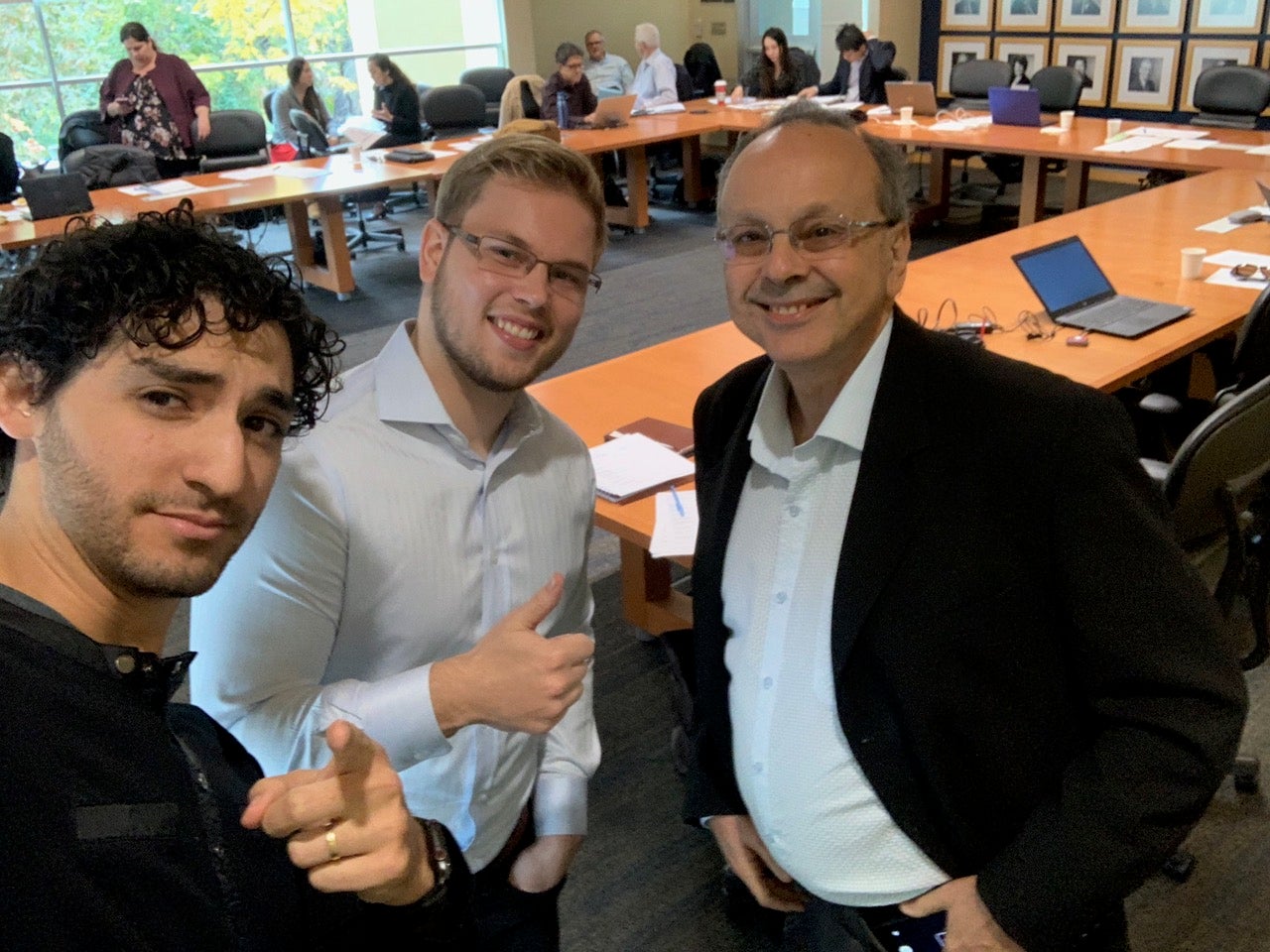 Bach to the Future!

Composers' Collective at UC Riverside held its first R'Comp Presents event of the academic year: Bach to the Future! They met at EARS on Thursday, November 21 at 6:30 pm to listen to all 24 J.S. Bach preludes and fugues from The Well-Tempered Clavier, Book I at the same time on 24-channel speakers, discuss counterpoint in several genres of music, hear more music by Bach, and watch Back to the Future.

Click here to find out more about the Composers’ Collective at UCR.

Ethan Castro and EARS Student Group members participate with Stanford’s Scott Oshiro and Chris Chafe in an online improvisation event as part of the NOWNET ARTS CONFERENCE 2019 with participants from New York, Belgium, Scotland, Berlin, and many more! 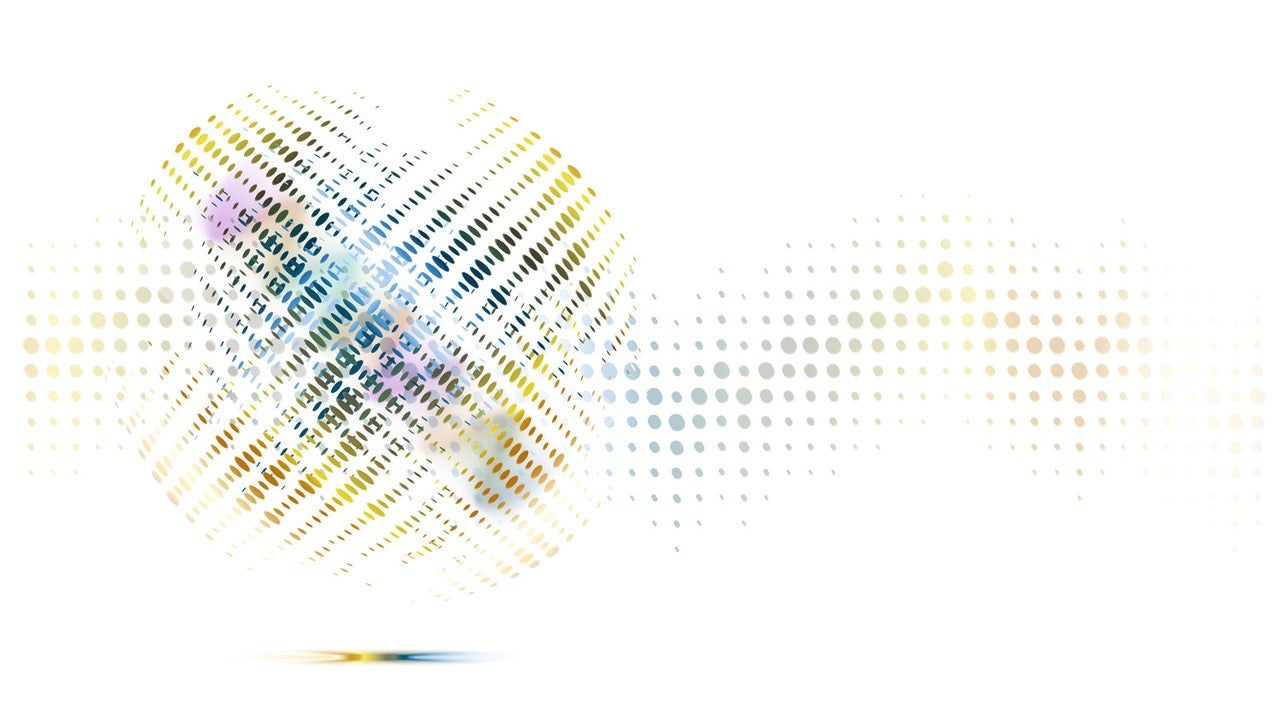 EARS became a music production classroom for the first time with the help of Visiting Assistant Professor Bradley Butterworth. Bradley led a hands-on audio lab that taught students the ins-and-outs of Avid Pro Tools and how to properly engineer a recording session for differing instrumentations. The same quarter, Dr. Rene Lysloff directed Area 52, the UCR Music Department Laptop Ensemble, through experimental improvisation methods and indeterminate composition. In the 2019-2020 school year, EARS plans to maintain its forward momentum and dedication to introducing even more digital production courses, cultivating talented minds, and becoming a central hub for communal art creation in the Inland Empire.

EARS hosted a series of four events for R’Comp, the Composers’ Collective at UCR that were dedicated to spreading knowledge and creating new content about historic musical trends - with a twist. The first event, Cereal, Serialism, and The Matrix combined intensive and technical lectures from student composers about the contemporary musical style from student composers with more light-hearted fare to bookend the event. The rest of the events throughout the quarter created many other creative outlets such as a comical podcast that chronicled the different styles and an unparalleled listening experience of Rachmaninoff’s 24 Piano Preludes all at once using EARS’

Creation of the EARS Student Group

In Fall 2018, Music graduate students Ethan Castro and Christiaan Clark created the EARS Student Group to reach out further into the UCR campus. EARS now has nearly 40 diverse students and collaborators continually using the space and sharing fresh experiences every day while working on interdisciplinary projects. Ethan engineered a tactile stage that allows audiences to experience music while standing on a vibrating wooden platform. Christiaan Clark put a team of undergraduate composers together to explore new dynamic methods of music creation for video games, a traditionally nonlinear medium. Now one year old, the group continues to grow and explore new aspects of multimedia.

EARS Showcase presented the premiere of Patrick Gibson’s Three Études for Electric Guitar and Electronics along with music and audiovisual works created by undergraduate and graduate students at EARS.

“Online Jammin’” was a workshop on collaborative performance through the Internet with Chris Chafe and Scott Oshiro from Stanford University’s CCRMA. Those in attendance learned how to create and perform music through the Internet, and taught open-source techniques for setting up audio links for collaborative research and performance. Participants performed live with musicians located in Santa Barbara and Palo Alto.

“Online Jammin’” was part of Paulo C. Chagas’ project Intersections of Art, Technology & Society supported by the Center for Ideas and Society.

The JOY Songwriting Camp brought producers and songwriters together to EARS once again to generate new songs in the style of hip-hop based on ten chilling short stories. These fictional narratives, brought to EARS by choreographer Joy Ndombeson (professionally known as “Justice Over Yourself”), included dark themes about underprivileged children in Fresno that the musicians had to channel in their lyrics. In just two days, more than ten ideas went from inception to completion for a possible future hip-hop dance show.

The ASYLUM Songwriting Camp brought 32 composers and music creatives from the University of California, Riverside, and the surrounding community together for two days of creative sharing and communal learning at EARS. Other producers and songwriters, all with diverse backgrounds and experiences, came all the way from Orange and Fresno Counties to join UCR composers for this event. 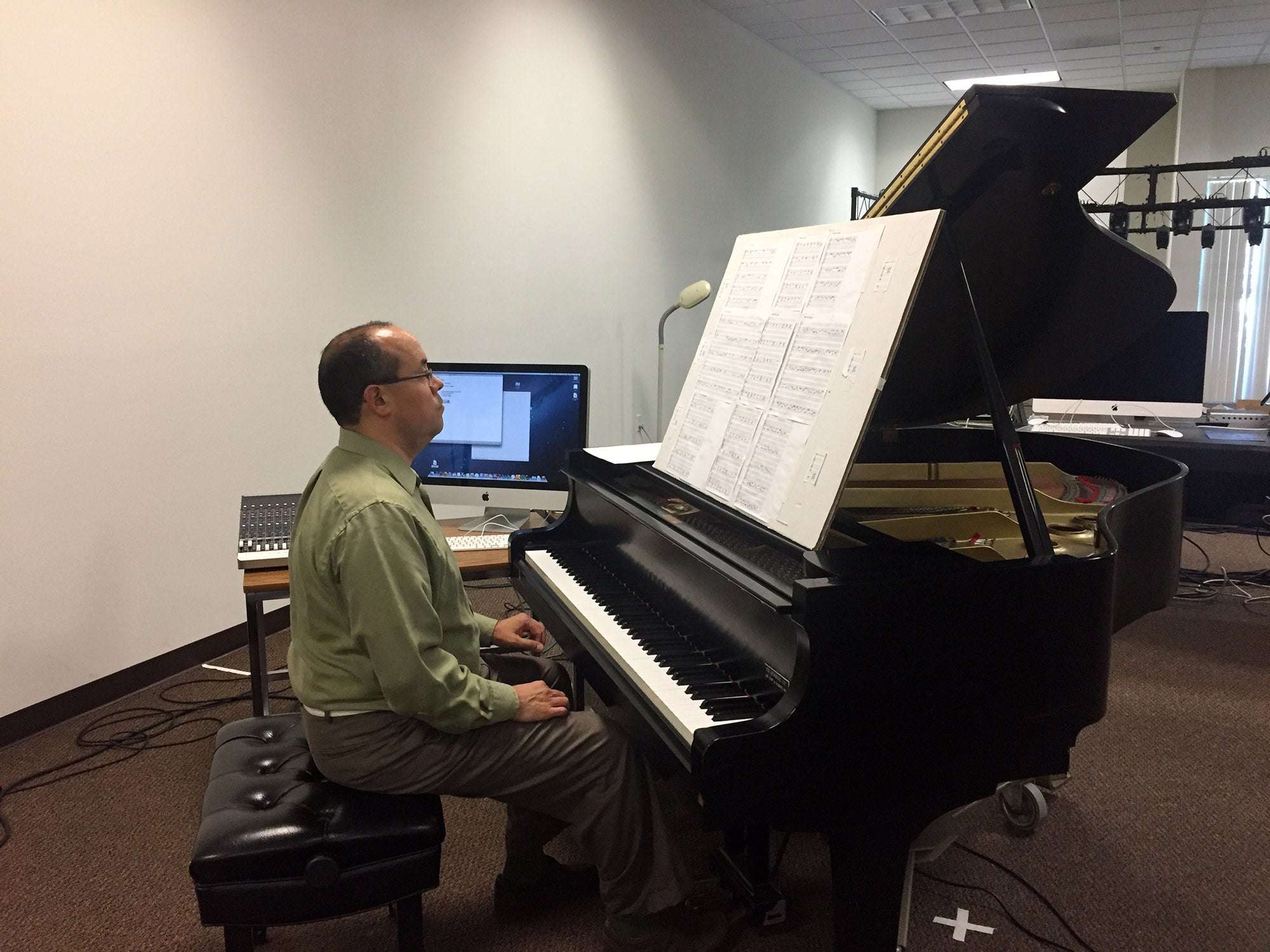 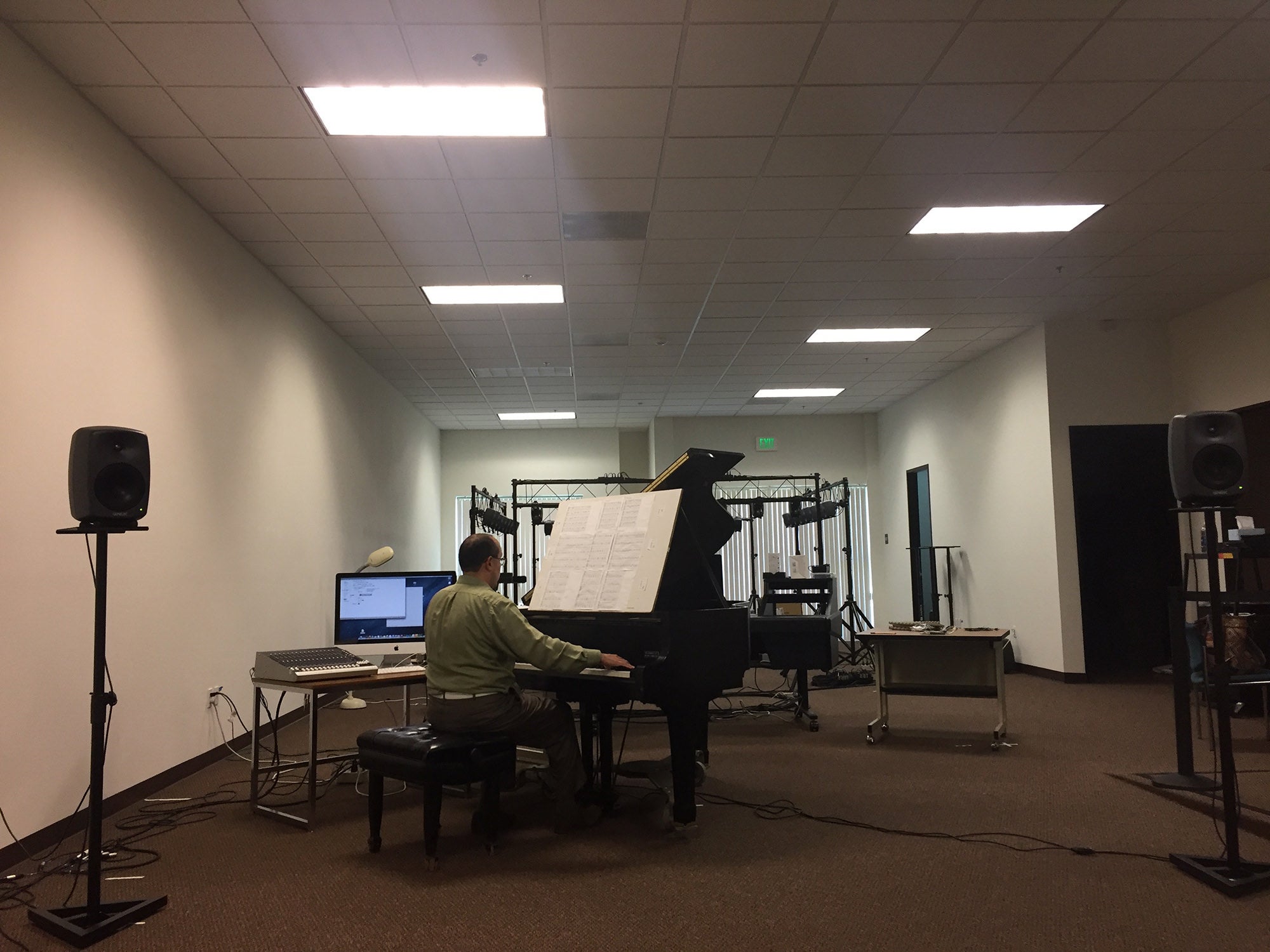 Brazilian composer Guilherme Bertissolo and Brazilian dancer Lia Sfoggia worked in February 2017 as artists and scholars in residence at EARS for the project, “Capoeira, Sound and Movement.” Capoeira is a combination of dance and martial arts that has been developed in Brazil by West African slaves and its descendants and has been exported all over the world. Capoeira has a symbolic meaning as a practice of resistance and emancipation from social and cultural oppression (In 2014 it was granted the status of world cultural heritage by the UNESCO). Bertissolo & Sfoggia’s are both Capoeira practitioners. Their work captures models of artistic creation emerging from poetic context of Capoeira, which illuminate significant aspects of Brazilian culture while establishing a broad artistic dialogue that includes also the critical reflection on digital audiovisual technology.

James Gardner, New Zeeland composer, broadcaster and performer, gave a lecture on his music and the pianist Dzovig Markarian performed the pre-premiere of his composition Displacement Activities for piano and electronics.

James Gardner produced for Radio New Zealand (RNZ) “These Hopeful Machines,” a six-part series that traces a personal path through the evolving world of electronic music.

Gary Barnett performed a recital at EARS with both piano solo music and music for piano and tape, piano and interactive electronics, and piano, video and interactive electronics. Composers on the program include Violeta Dinescu (Romania), Mario Davidovsky, Martin Jaroszewicz (UCR doctoral student), Liviu Marinescu, and Paulo C. Chagas. This same recital was performed in Bucharest, Romania, in May of that year for the International Festival of New Music of the National Conservatory of Romania, Bucharest.

Igor Kefalidis, Professor of Composition at the Moscow Tchaikovsky Conservatory and director of the Moscow Conservatory Center for Electroacoustic Music (CEAMMC), produced a new work for ensemble and electronics. He also discussed his work with graduated students.