Throughout the second half of Fall Quarter 2020, the EARS Student Group worked on a collective project which involved students writing, recording, producing, mixing, and mastering eight Christmas songs for the holidays. Students also worked together to make Christmas-themed music videos from home for each song. 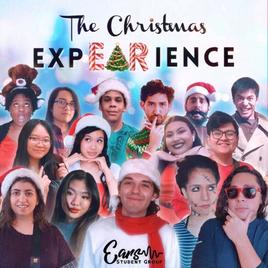 Paulo C. Chagas presents his new sound and video installation Sound Imaginations in the Black Box of the Culver Center of the Arts. The installation creates an immersive environment with ambisonics 8-channel sound and multi-visual projection of 360-degree videos. Immersed in a full-sphere of surround sound and virtual reality, the audience experiences the diversity of listening cultures from different places of the world. 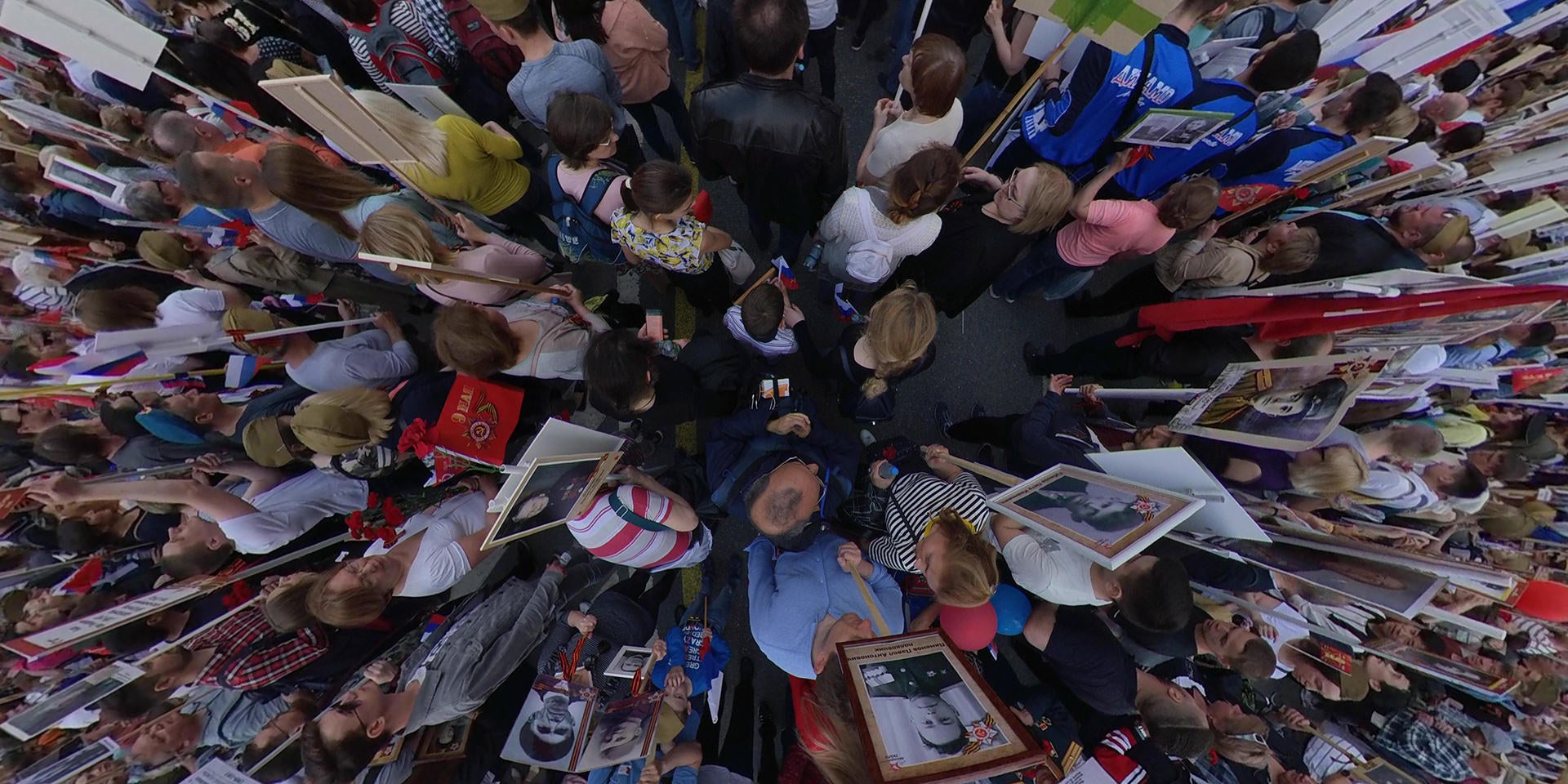 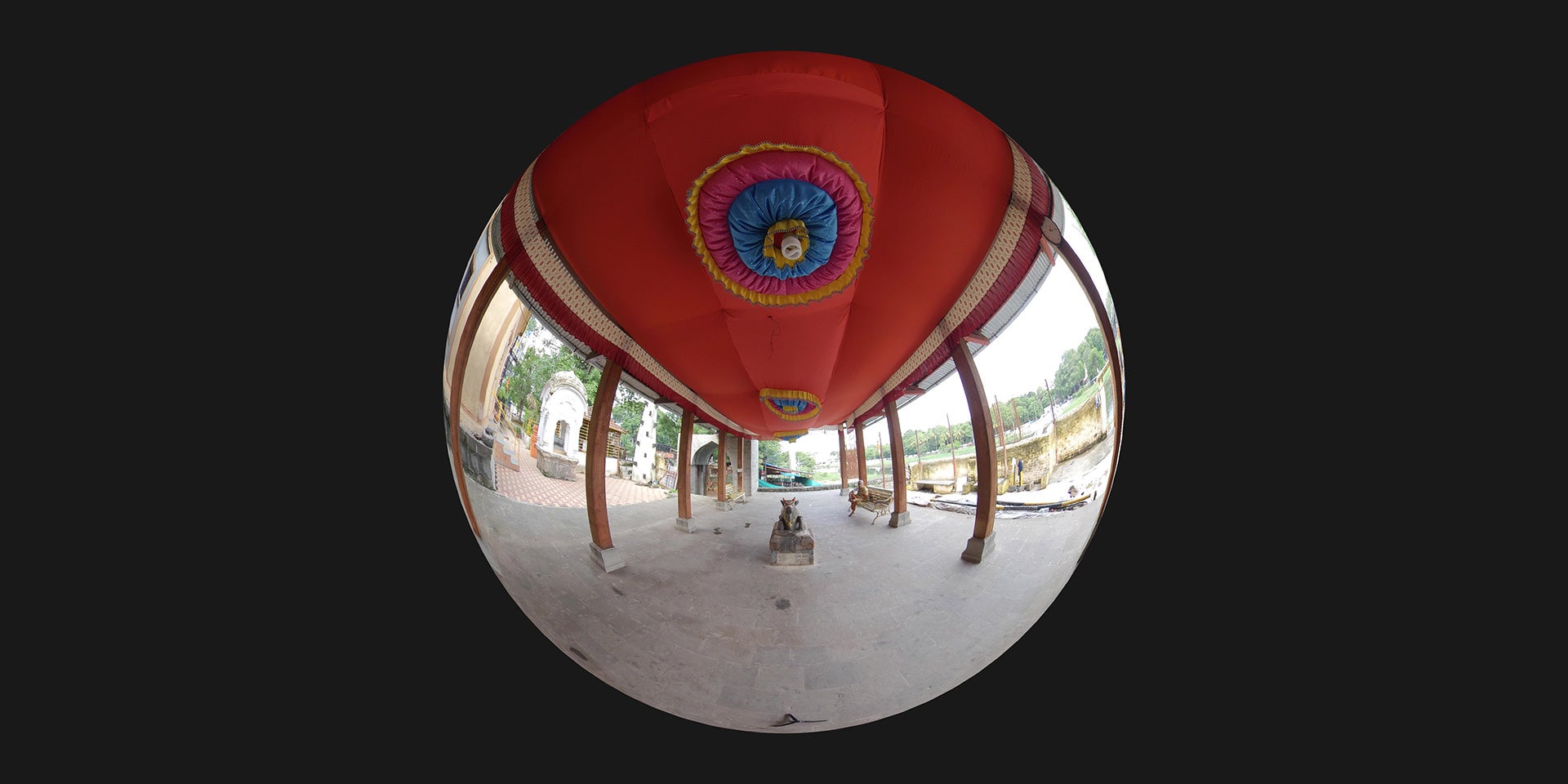 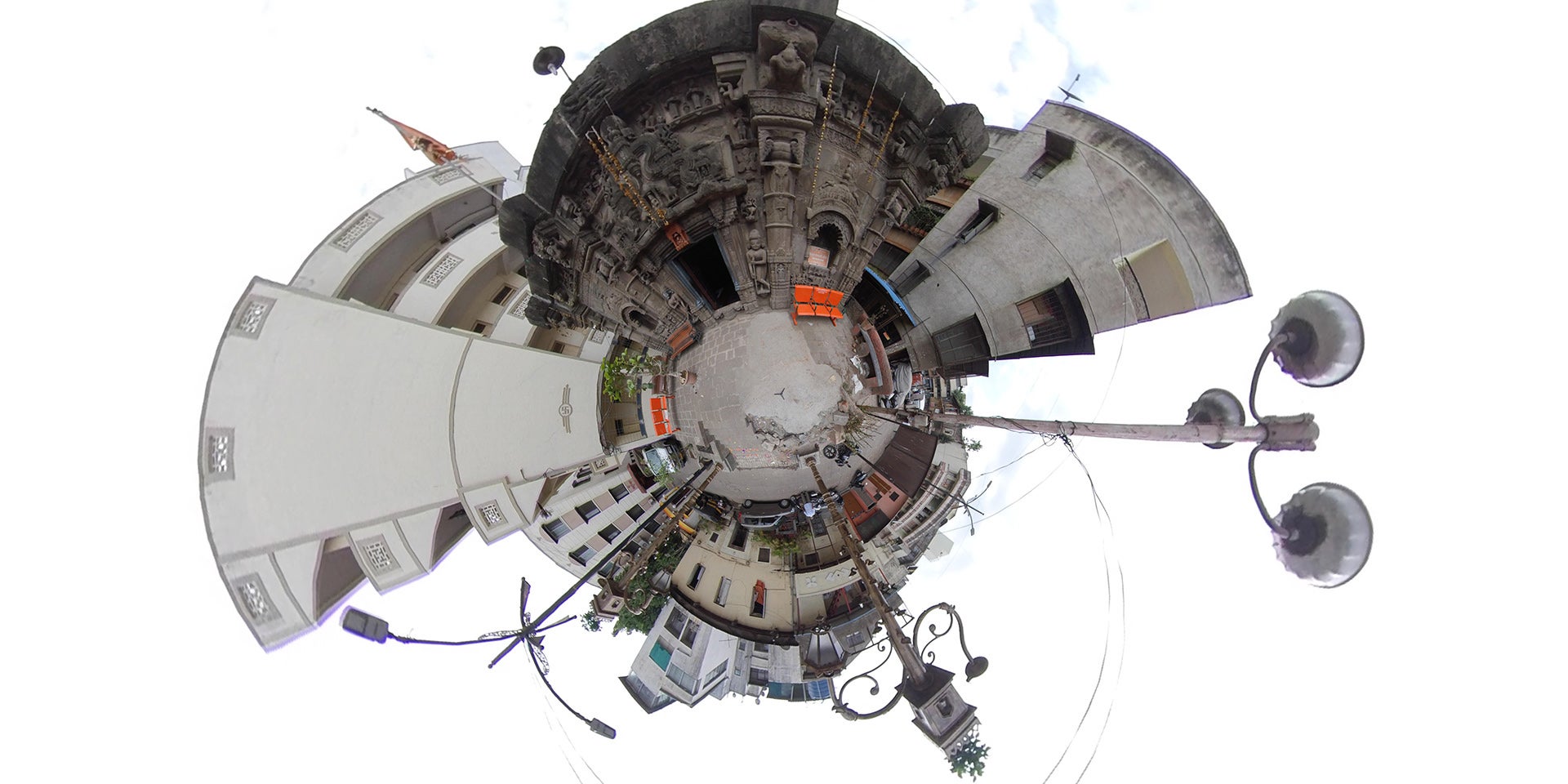 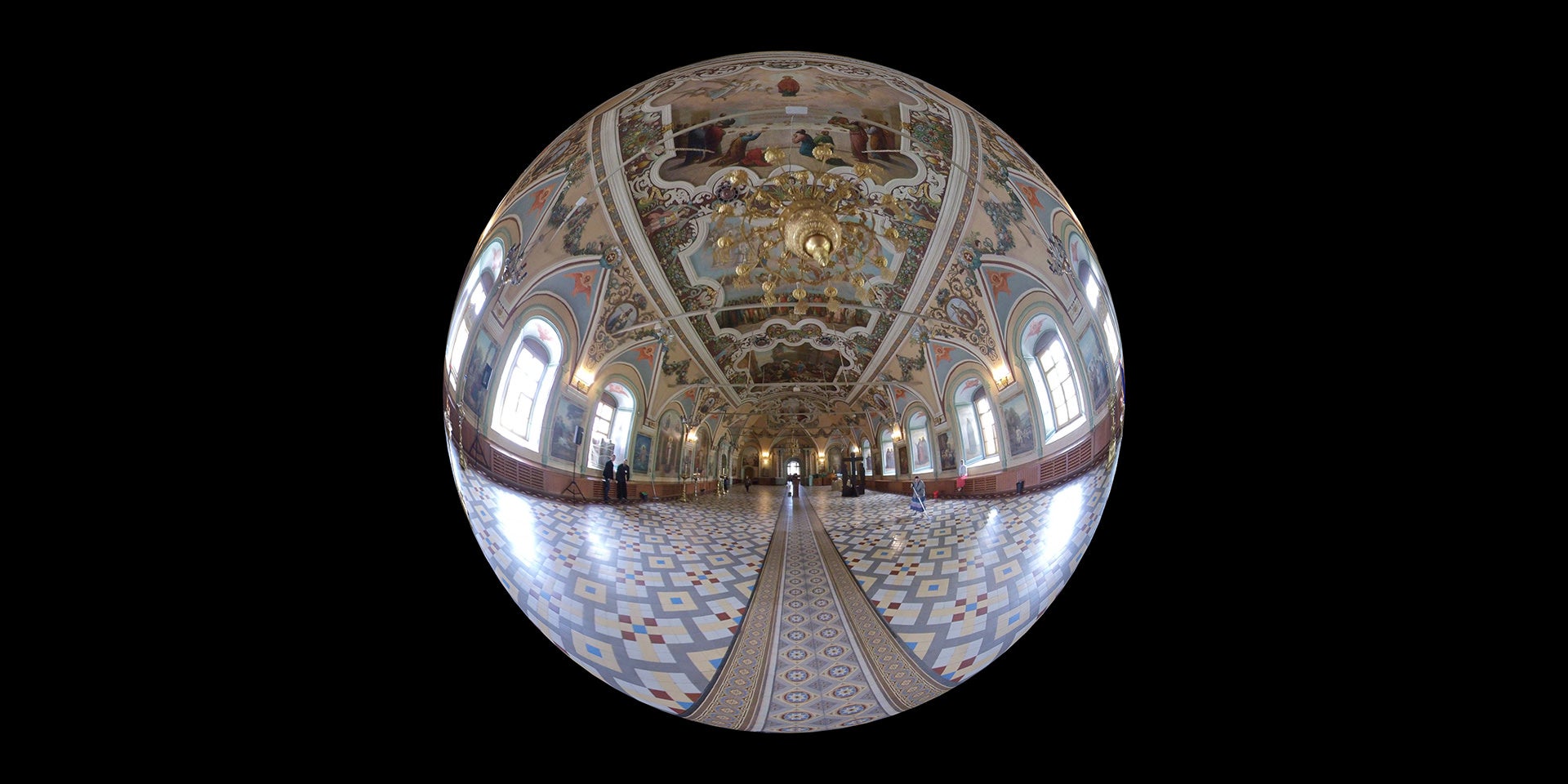 Absurd Biophony is an art and technology collaborative project by Paulo C. Chagas and the Brazilian flutist Cássia Carrascoza. It focuses on the creation of immersive audiovisual art, interacting with ecological and urban sound environments, and unconventional performance situations.

The project confronts the idea of biophony, which refers to the sound phenomena produced by living beings, the feeling of absurdity that emerges from the ambiguous relationship between humanity and the world: the impossibility of constituting the world as a unity and the very notion of historical progress, which has become a threat to biodiversity.

Our project is an artistic manifesto to accept the absurd as a conscious attitude of revolt, freedom and passion. Revolt is the perpetual confrontation between man and his own obscurity. The absurd freedom is an inner freedom, fruit of the attitude that celebrates the present moment and accepts things as they are. Nonsense requires an understanding of the world that is not logical but emotional, an existential attitude driven by passion.

The project explores new audiovisual technologies – 360 image and ambisonics sound — to produce immersive videos. We plan to create seven 5-minute videos (35 minutes total), which will be produced in two versions: one for digital platform, with 360-degree images and binaural sound; and another release for live events featuring live performance by Cássia Carrascoza with 5.1 surround ambisonics sound.

In Summer 2019, we recorded 360-degree videos with Cássia Carrascoza performing in the Trianon Park in São Paulo. These four videos are conceived as a pilot project to give insight on the possibilities of 360 images.

In Winter 2020, we recorded 360-degree videos and ambisonics sound at the Mojave Desert, near Twentynine Palms, California. 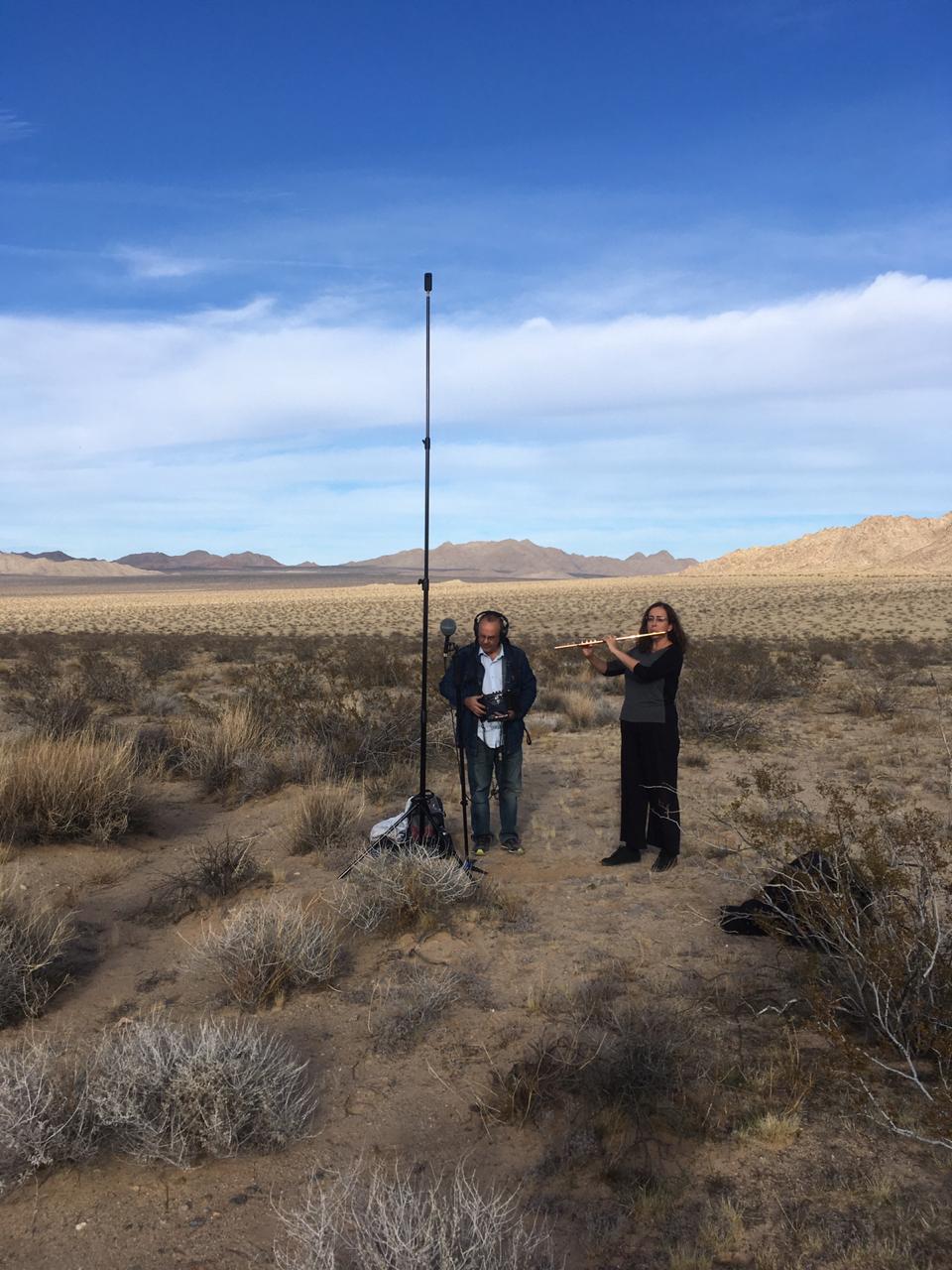 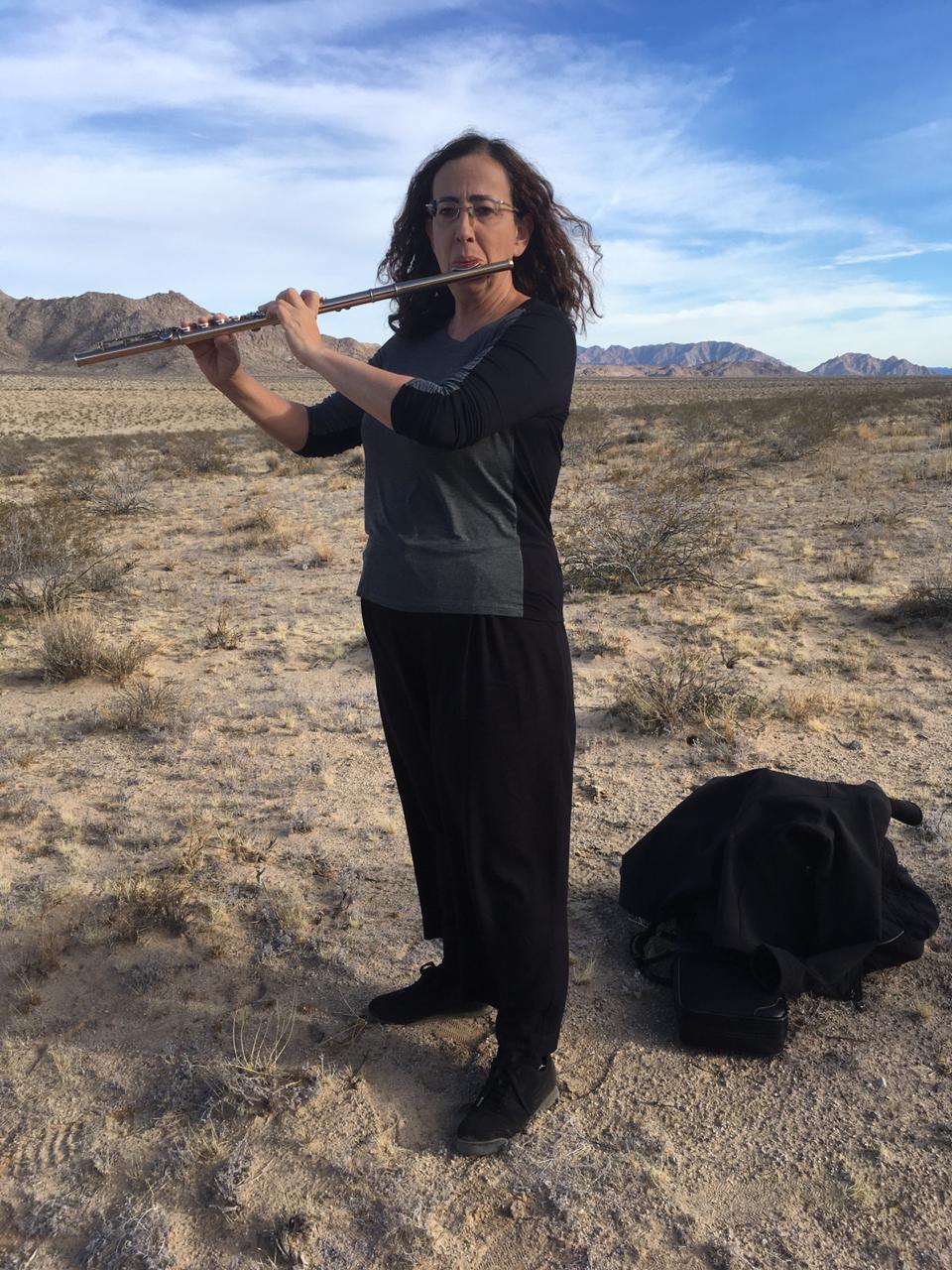 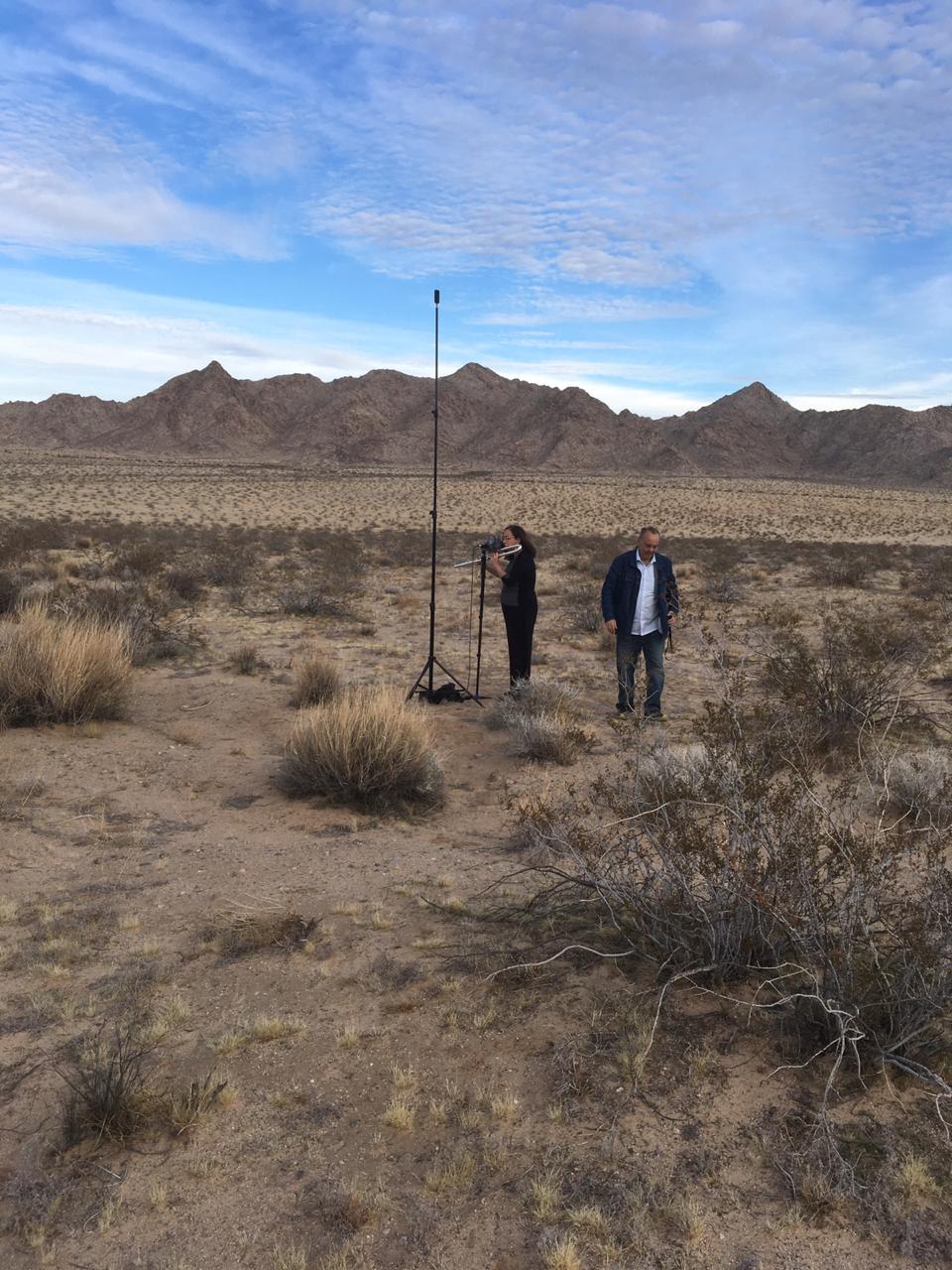 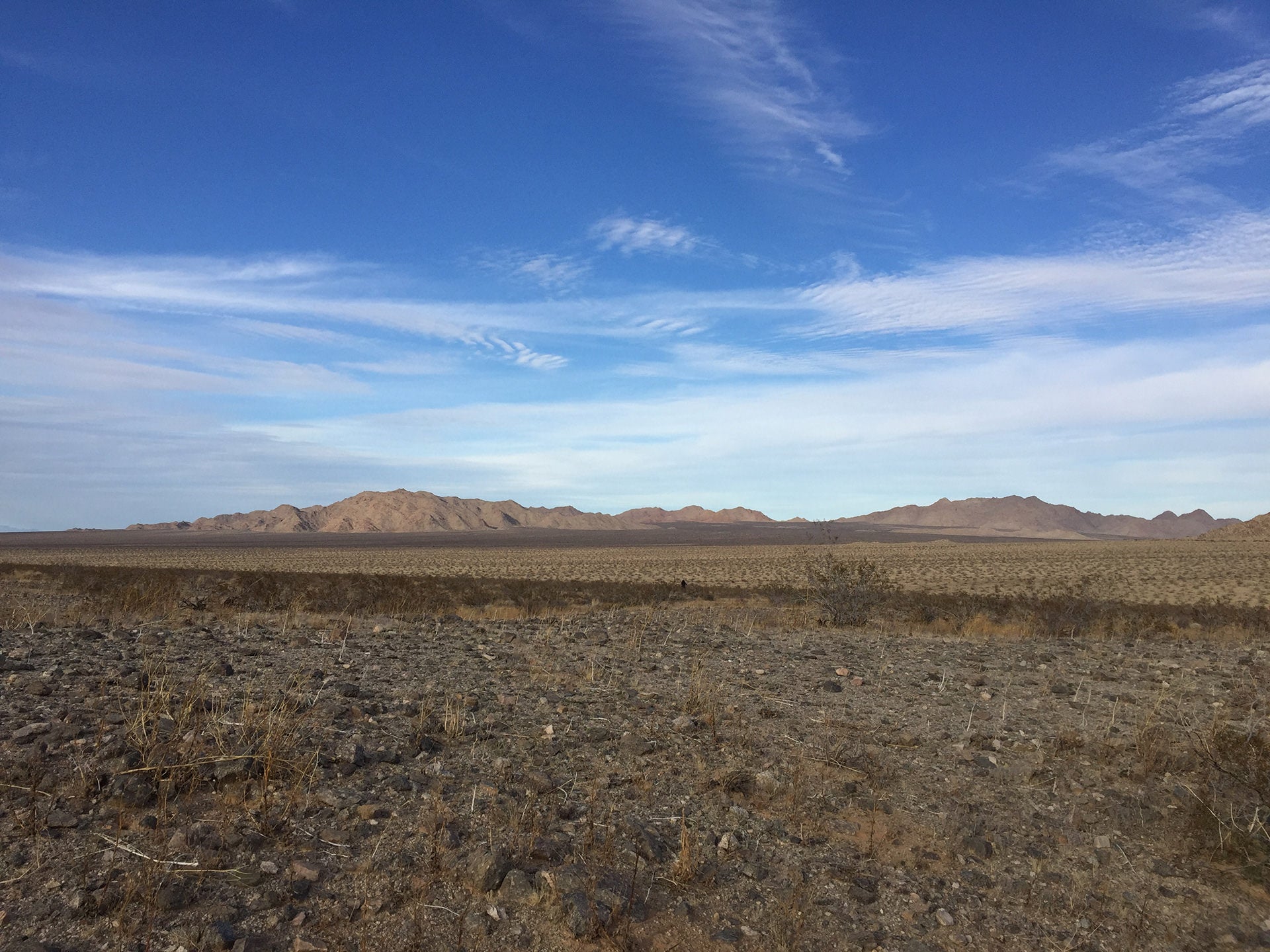 Created upon visual material from silent movies or inspired by them, the interplay of filmic art and music composition is driven by the new possibilities of digital sound composition, electronic music and digital visual arts.

The Metropolis Multi-Media Event follows the inspiration of Fritz Lang’s film Metropolis (1927) and his vision of large-sized ‘marriage of the arts’ while rediscovering the historical roots from which it arose – the interplay of filmic art and live performance. 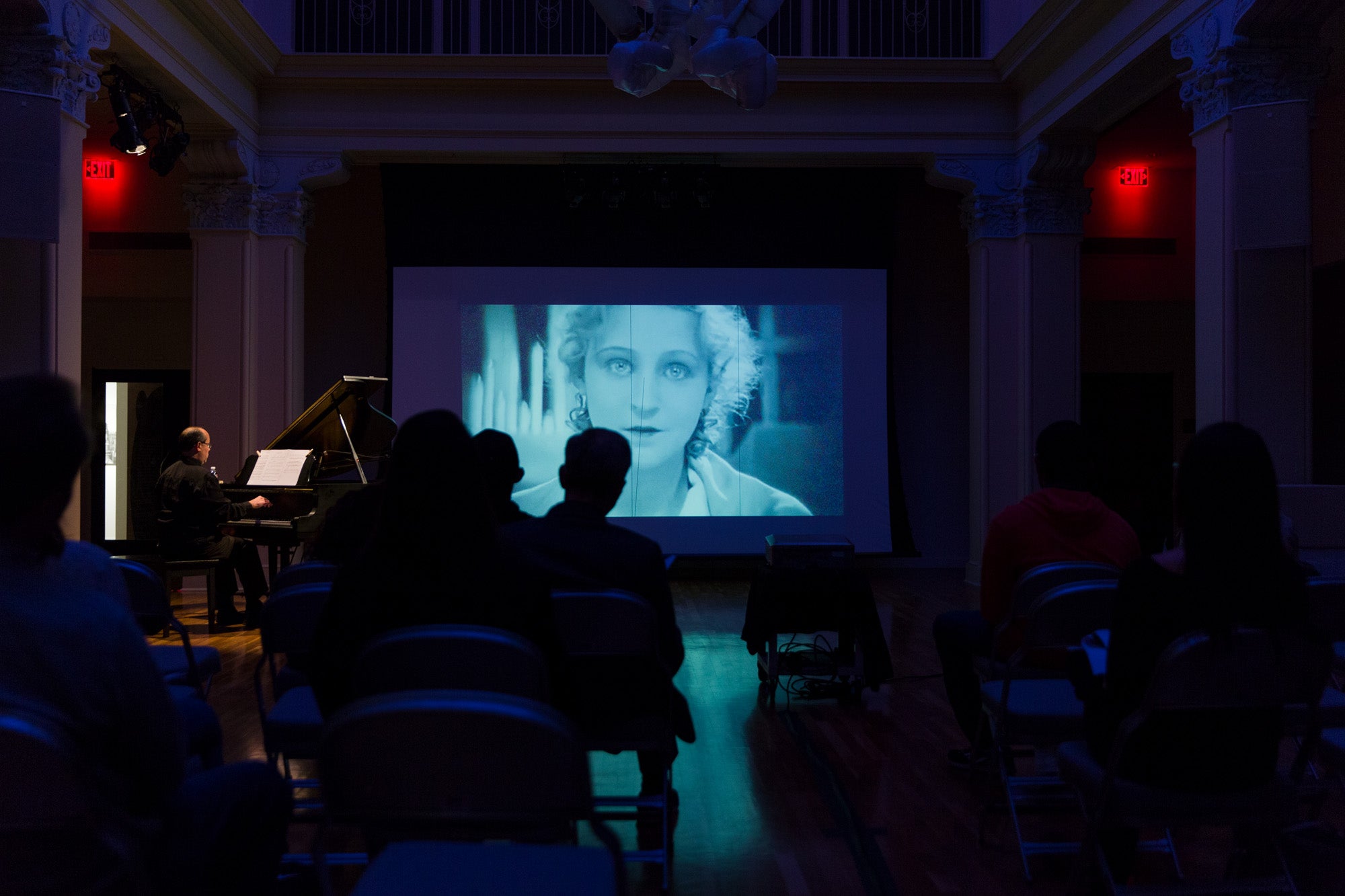 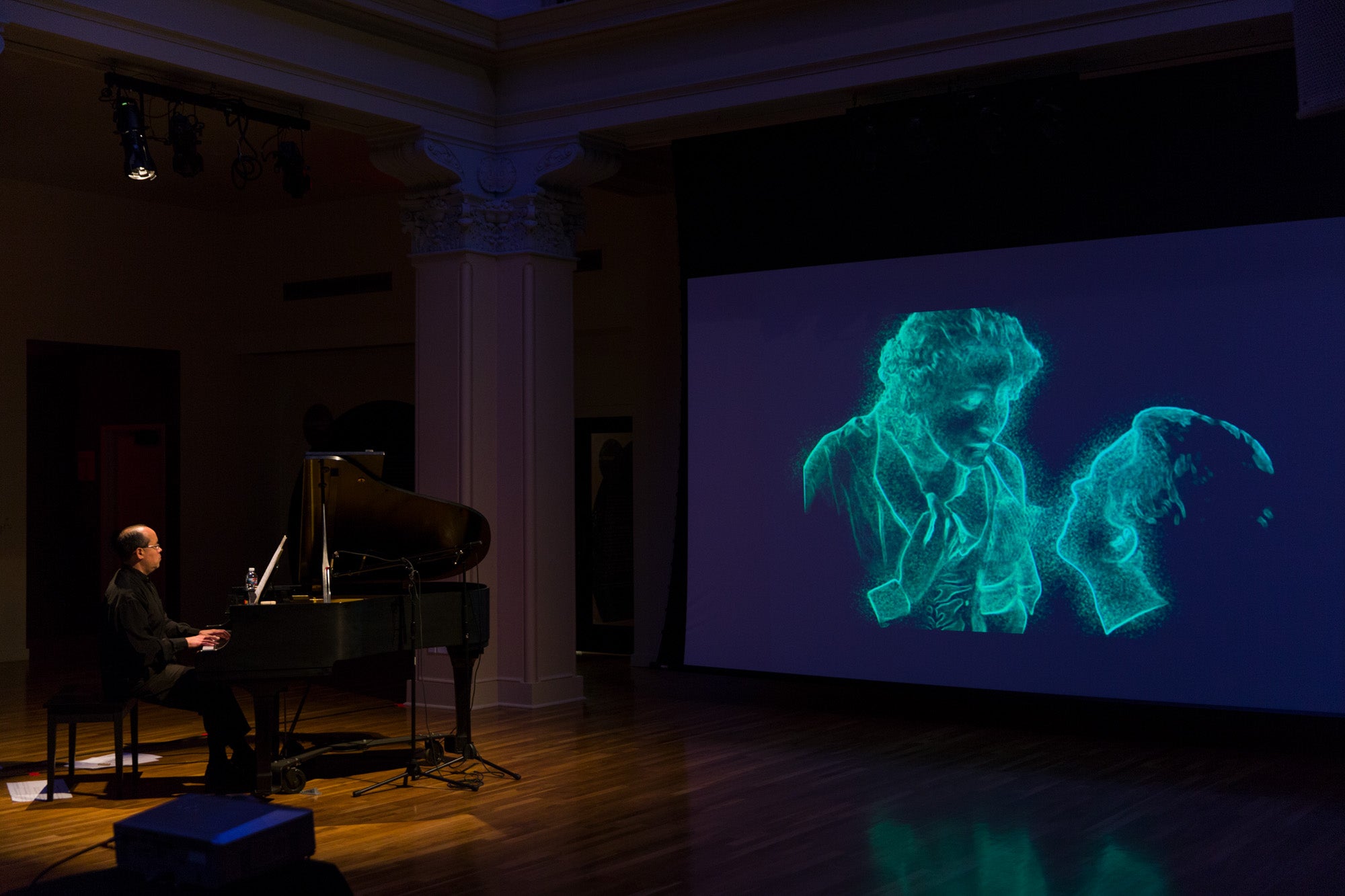 Workshop: “The Body and Musicality of the Movement”

How does the body contribute to musical composition and understanding? How the body supports musical expression in contemporary music? French artists Thierry Miroglio (percussion) and Sophie Jégou (dance and choreography) in residence at UCR give insight in the creation and performance of new works for dance, dance, percussion, electronic music and visual arts. In the workshop, they demonstrate the process of developing a choreography based on the concept of musicality of the movement. In the concert they performed works by Christian Eloy, Bruno Mantovani and Gérard Grisey, and Paulo C. Chagas.

Audiovisual installation and lecture by Guilherme Bertissolo and Lia Sfoggia.

The event features a new work by Brazilian composer Guilherme Bertissolo and dancer Lia Sfoggia developed during their residence at EARS in February 2017. The audiovisual installation captures models of artistic creation emerging from poetic context of Capoeira, which illuminate significant aspects of Brazilian culture while establishing a broad artistic dialogue that includes also the critical reflection on digital audiovisual technology.

Trauma, Loss and Transcendence is an event dedicated to the victims and survivors of this mass shooting, most of them inhabitants of Riverside and San Bernardino counties. It presents an immersive and interactive sound/video installation by Martin Jaroszewicz and Paulo C. Chagas and the world premiere of pieces by Martin Jaroszewicz and Paulo C. Chagas performed by Stacey Fraser, soprano, and Just DeHart, percussion. The works address the grief, the trauma, and the loss of loved ones while proposing a path for transcending suffering.

October 21, 2016 – “Sound Paths, Places, and Media”, a conversation with Hans-Ulrich Werner at the Center for Ideas and Society

Compositions by Mark Zebrowski and Paulo C. Chagas for string quartet and film performed by the California Quartet

Mark Zebrowski's Music for David (2015) was composed to accompany Fire, a short film written, directed and animated by David Lynch. 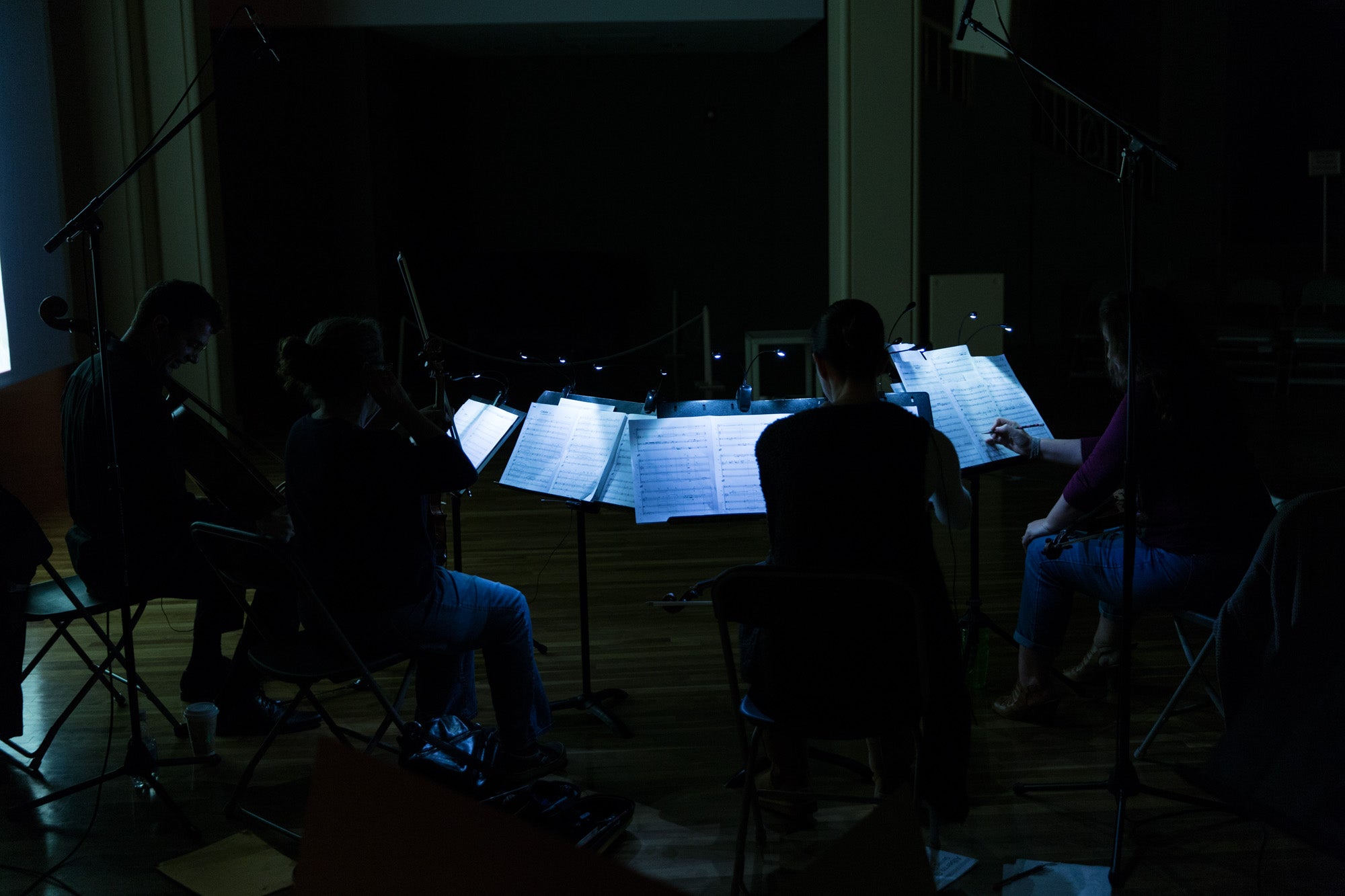 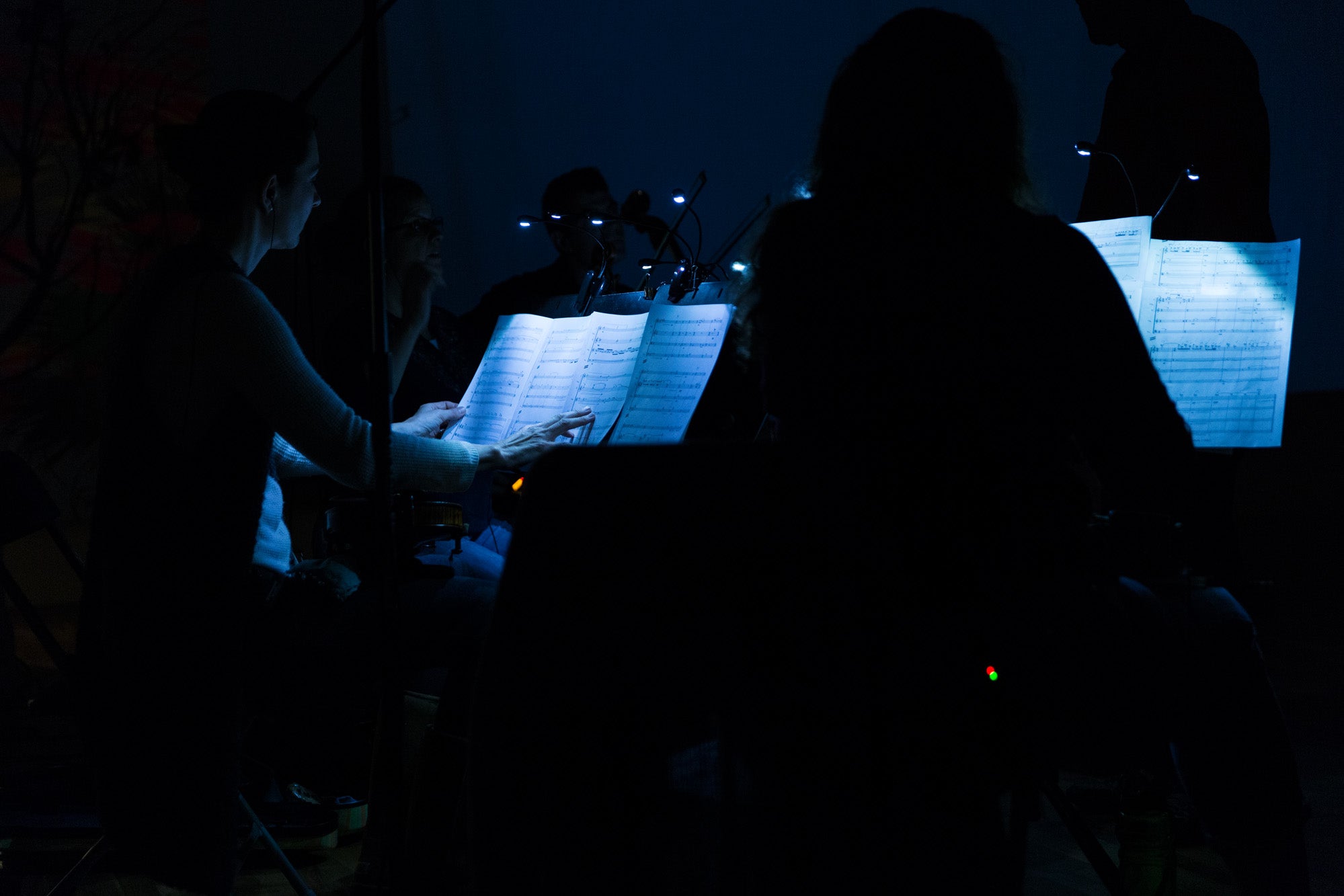 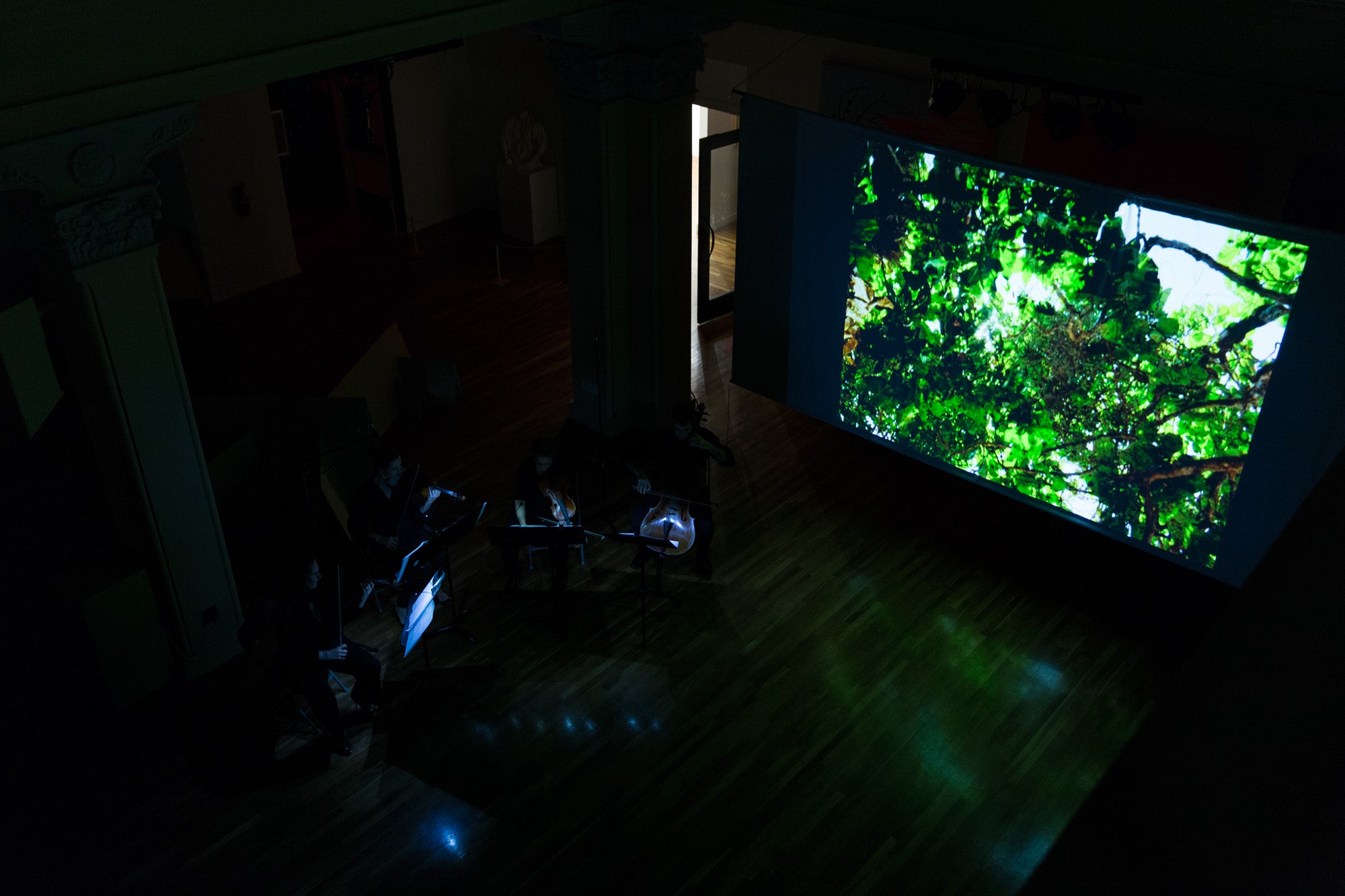 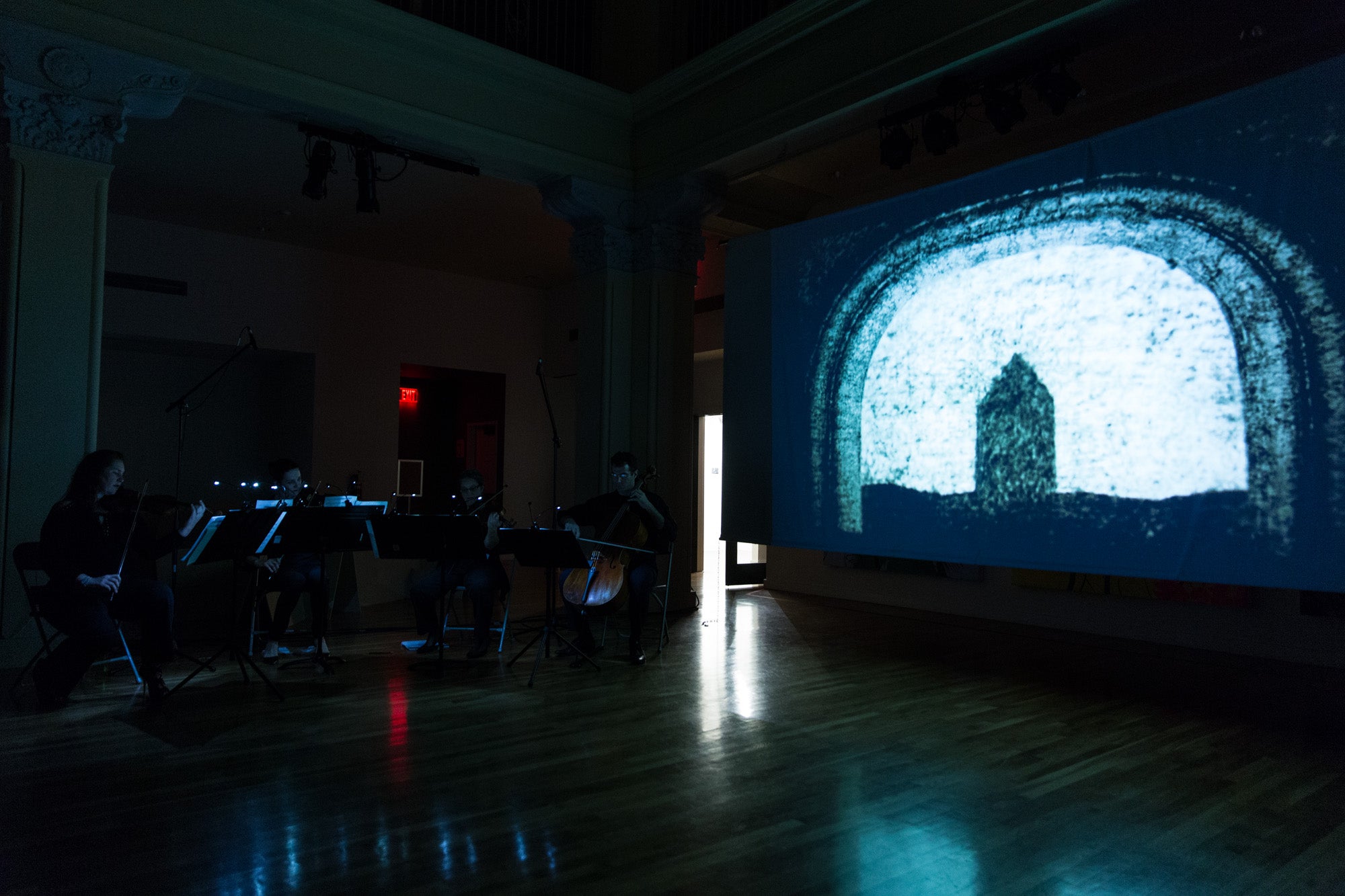 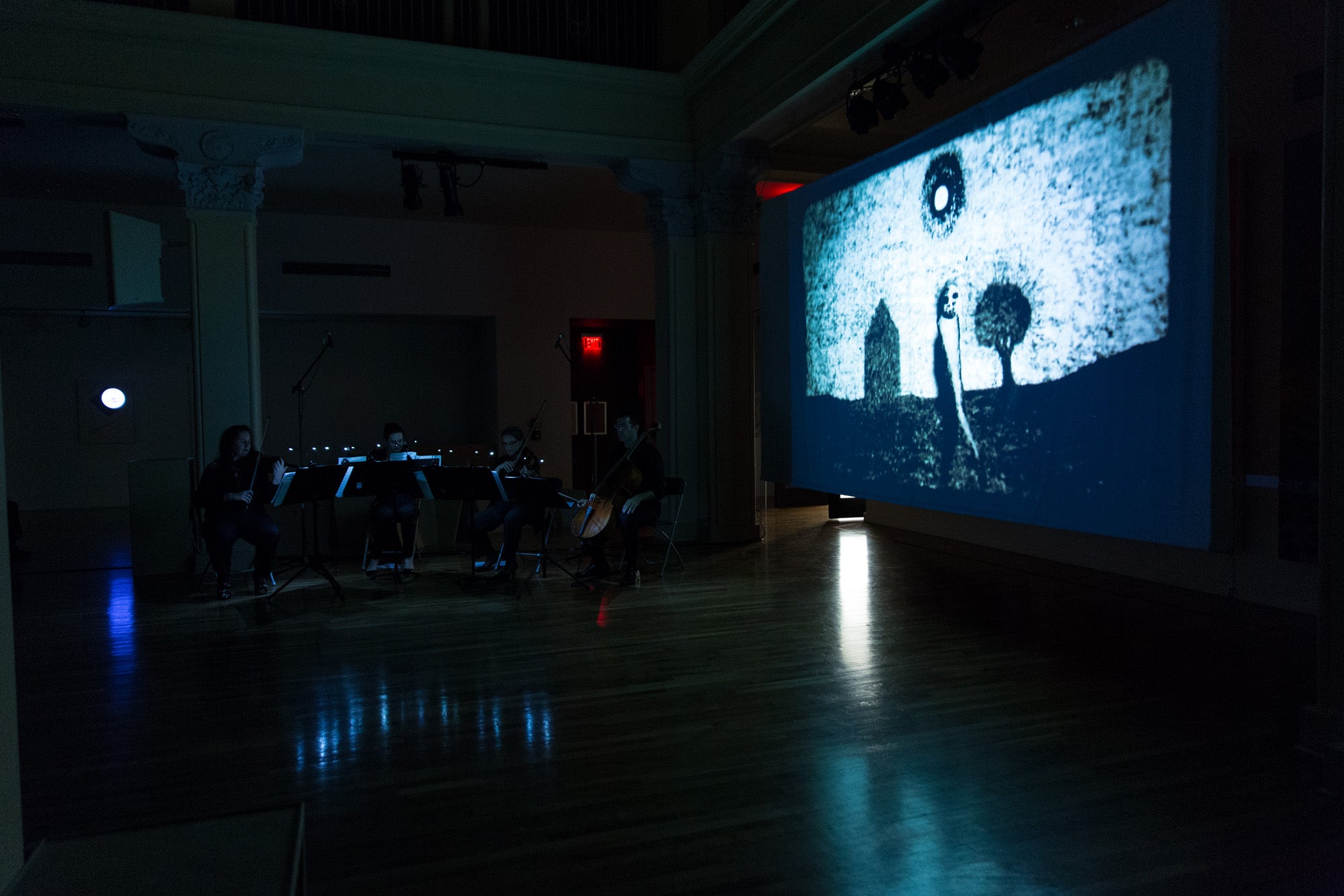 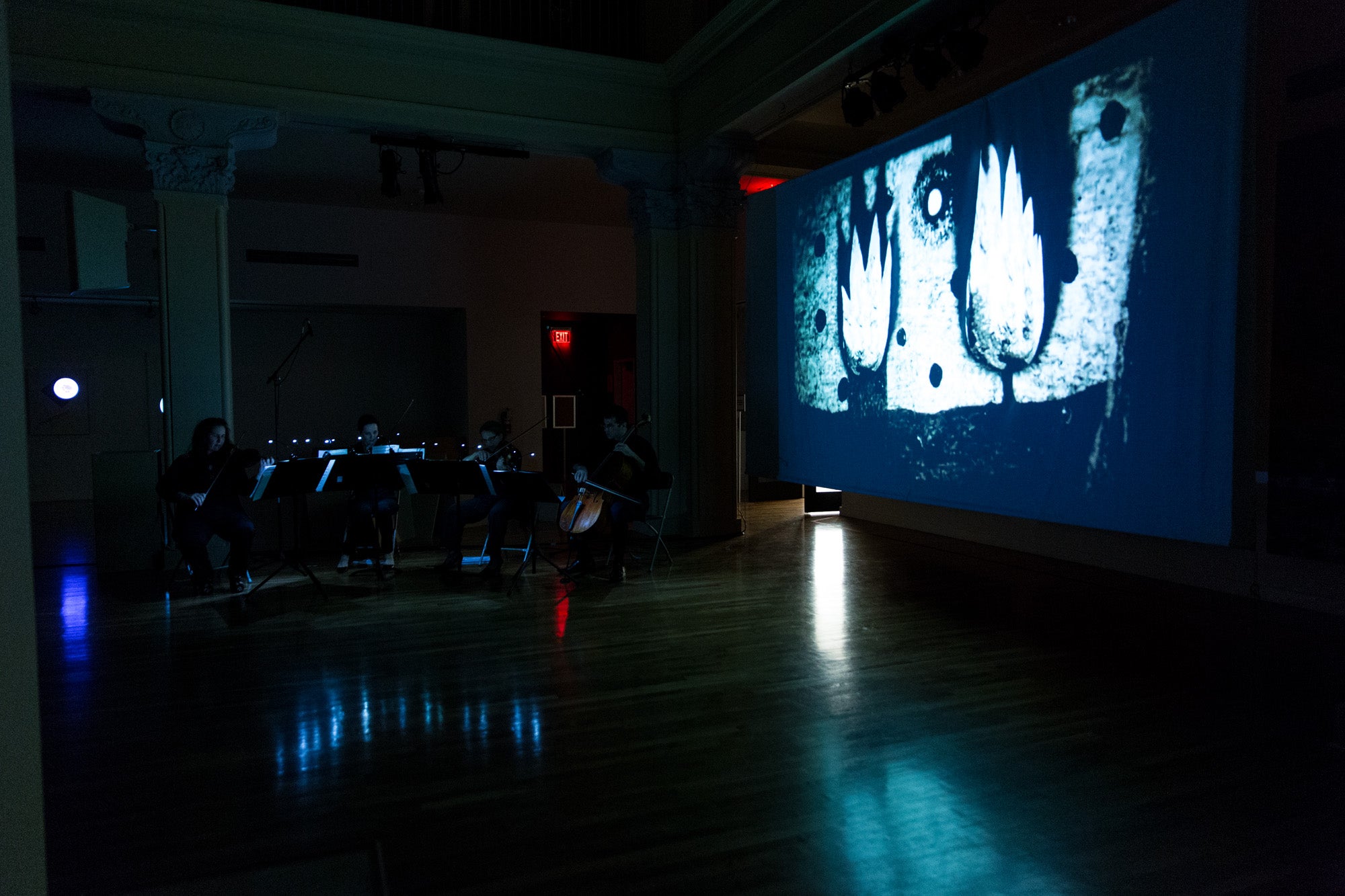 Nikolay Popov (1986), Russian composer and researcher, Associate Researcher at the Center of Electroacoustic Music (CEAMMC) of the Moscow Tchaikovsky Conservatory, presented his compositions for electroacoustic music and multimedia. 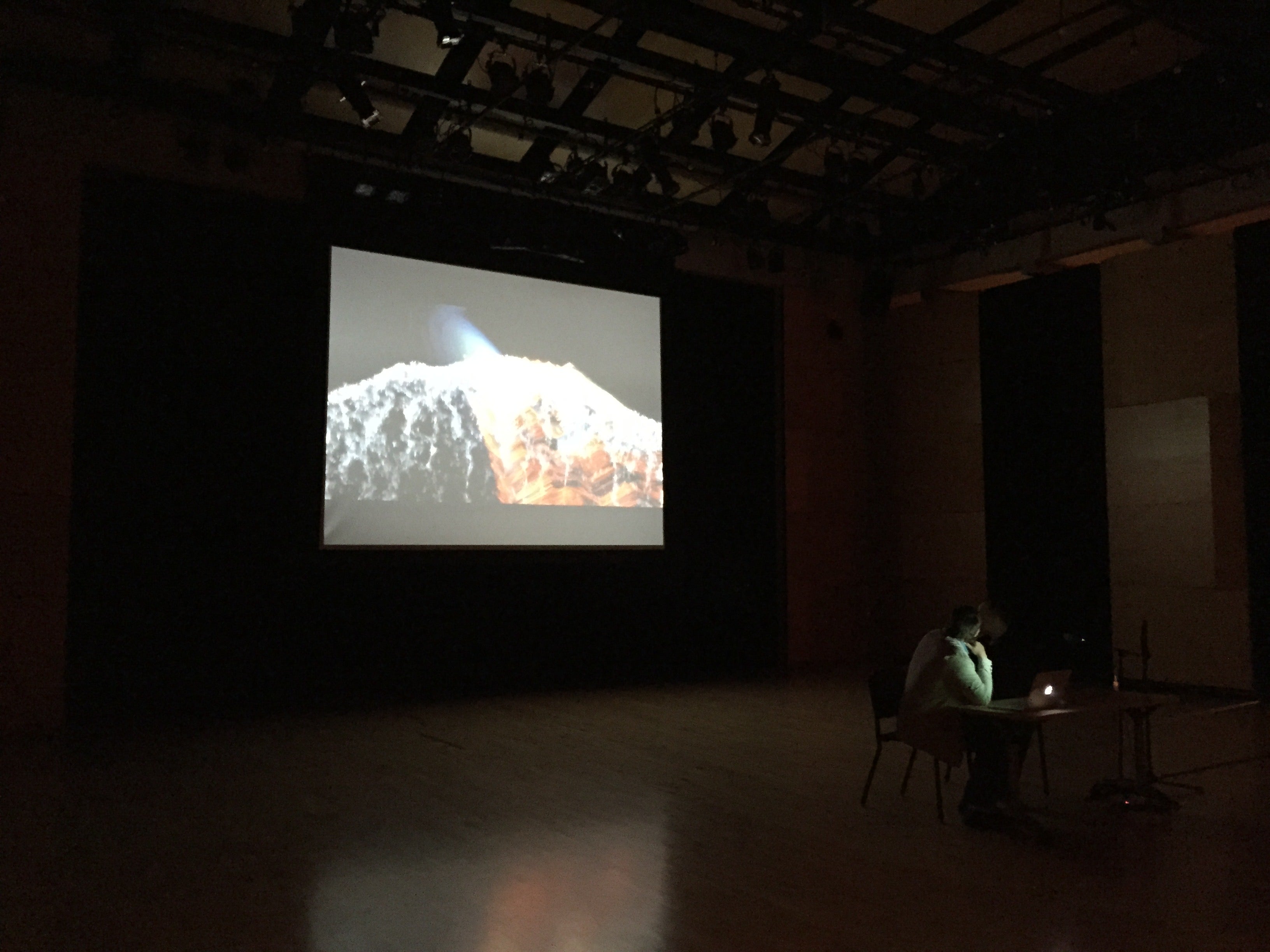 Gravity and Grace: Mobile III is part of a cycle of three pieces inspired both by the book Gravity and Grace by the French mystical philosopher Simone Weil (1909-1943) and the mobiles by the American artist Alexander Calder (1898-1976). The composition seeks to express the tension produced between heaviness and lightness, gravity and grace. The interactive visual projection processes pictures of prison and torture. 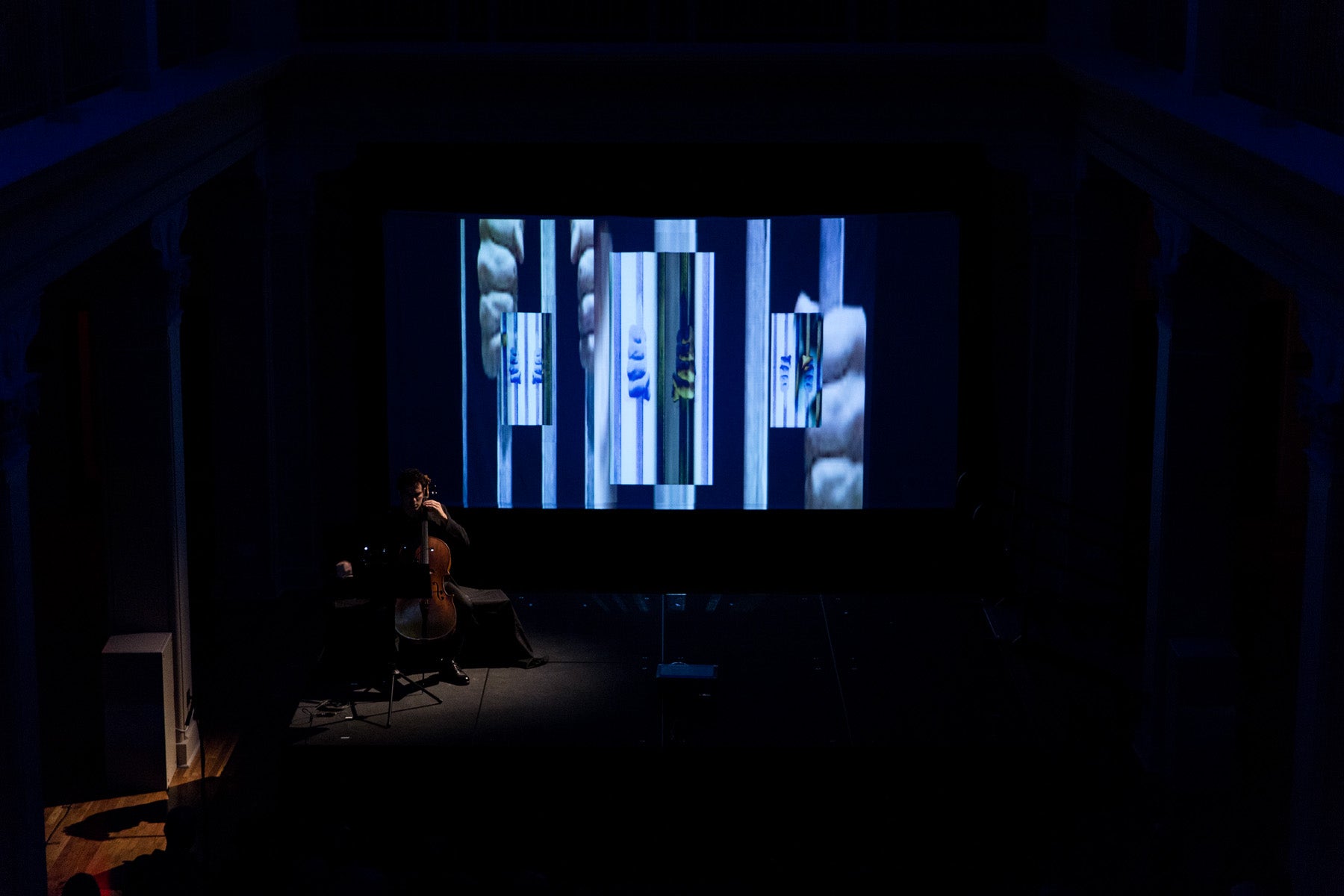 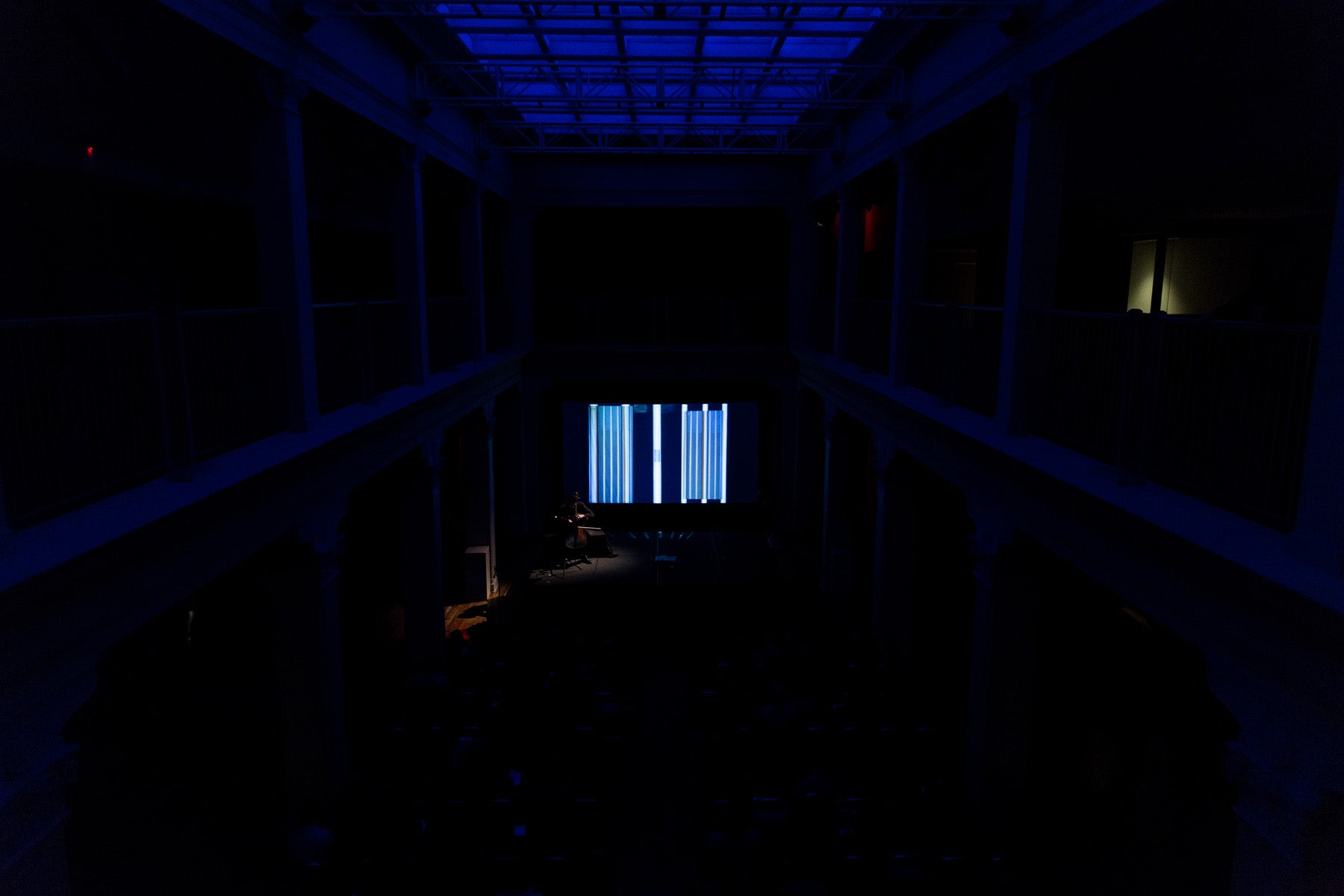 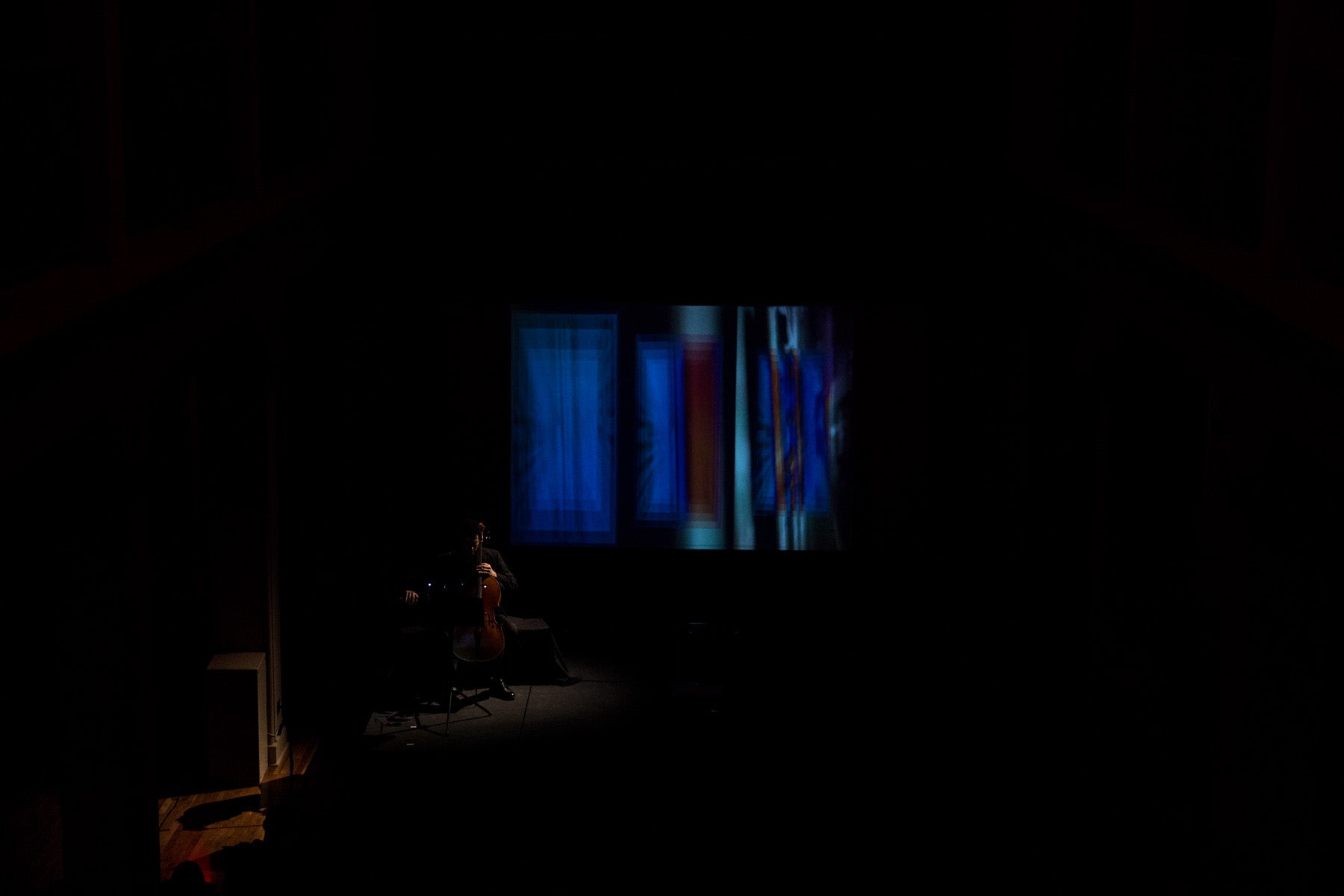 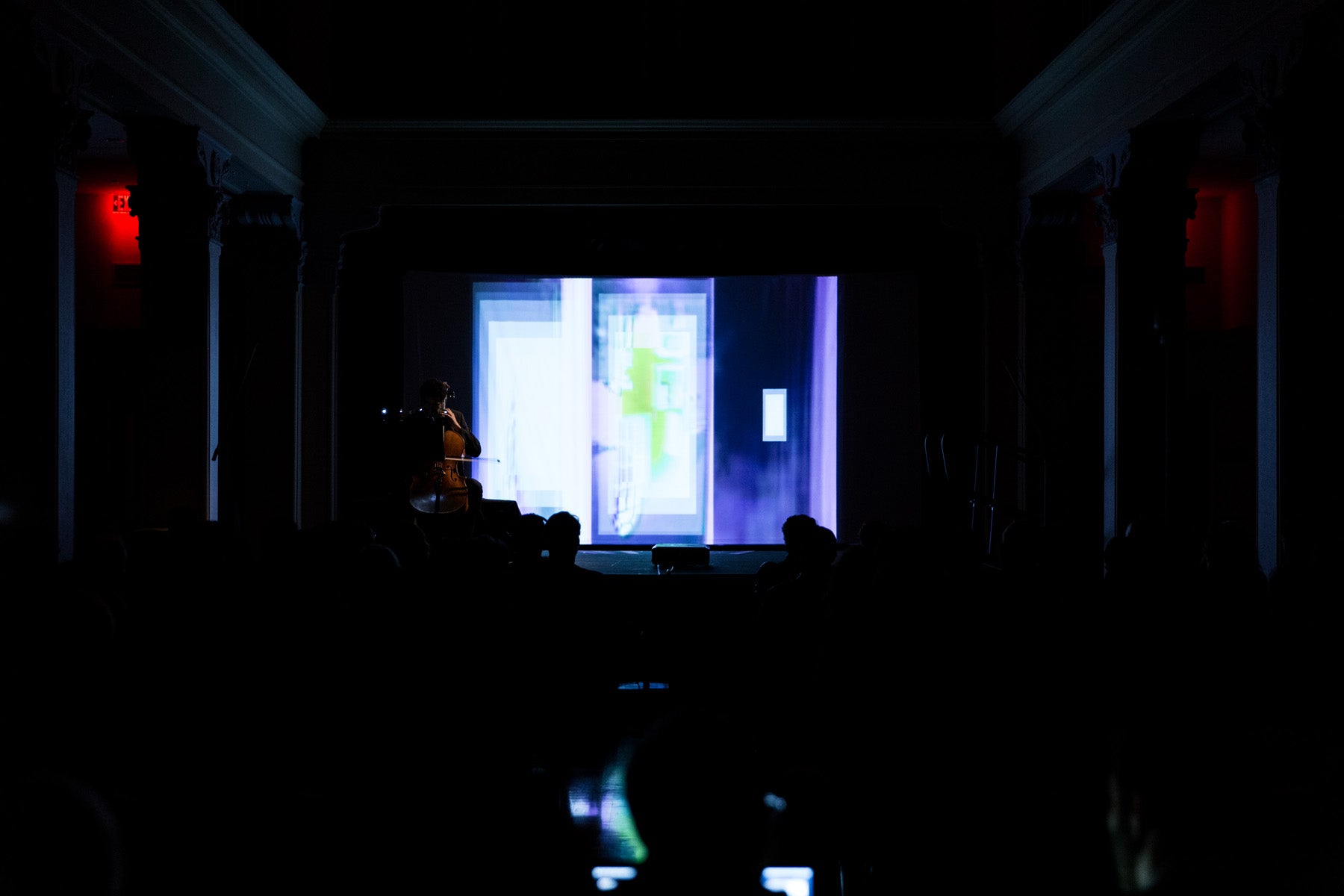 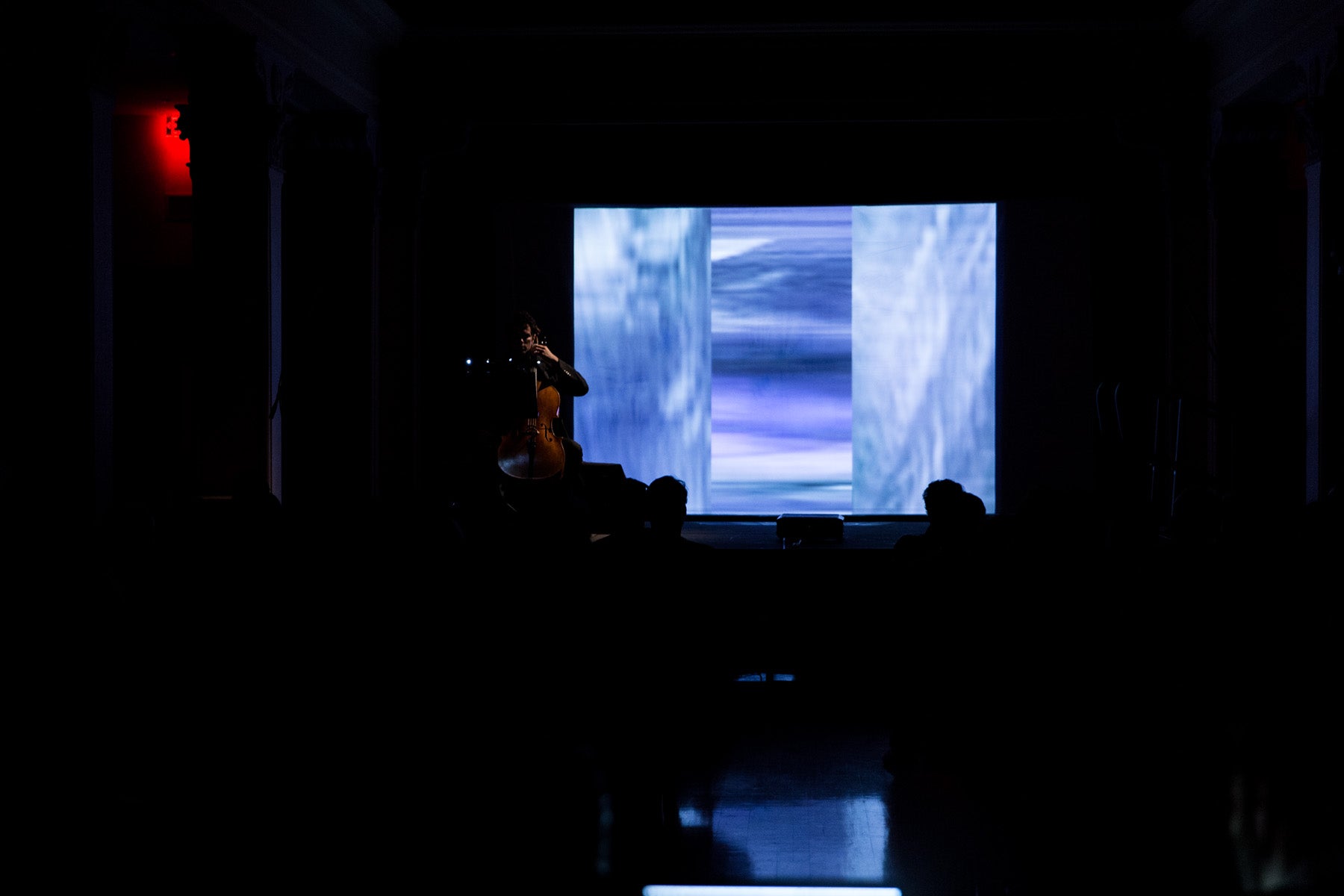 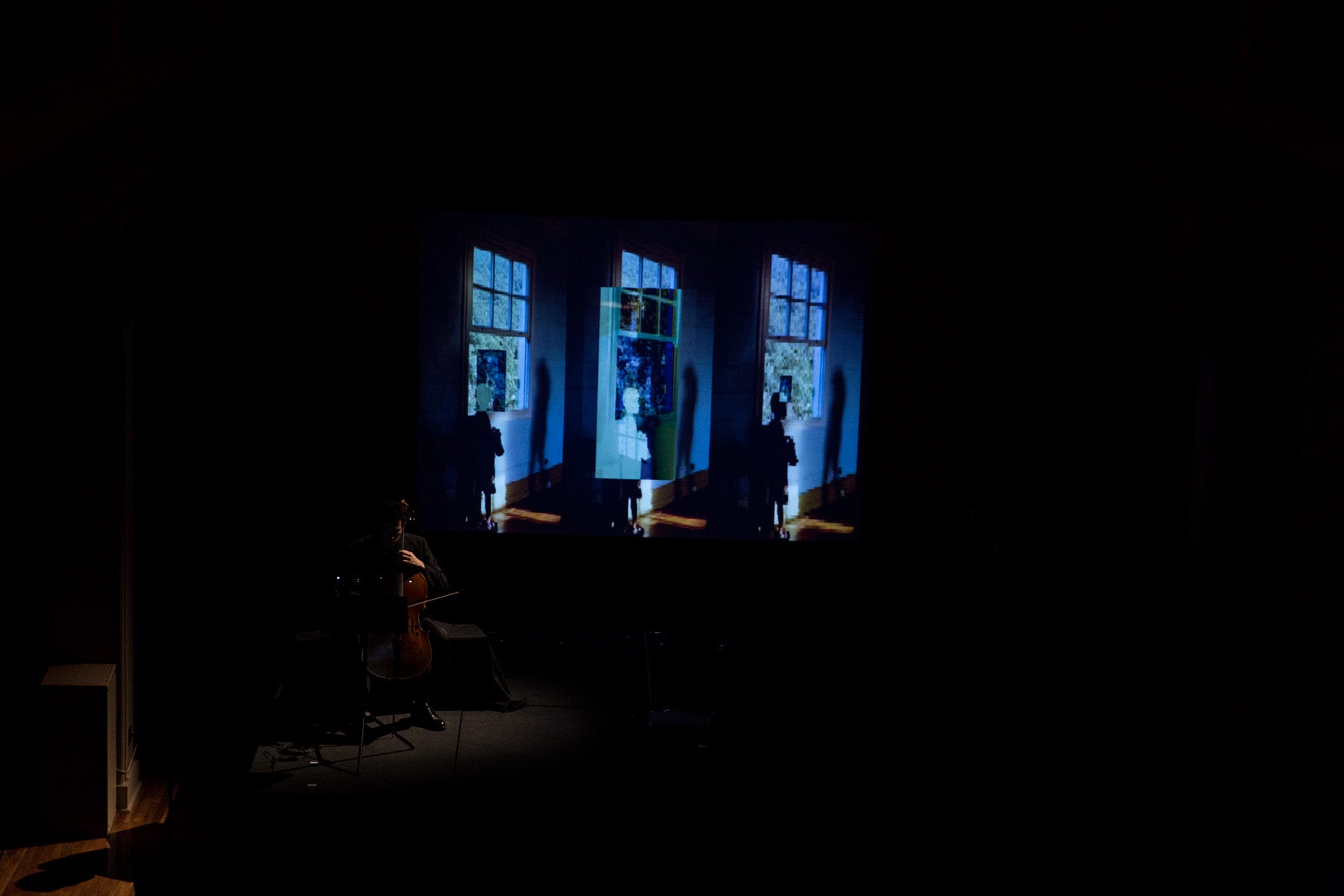 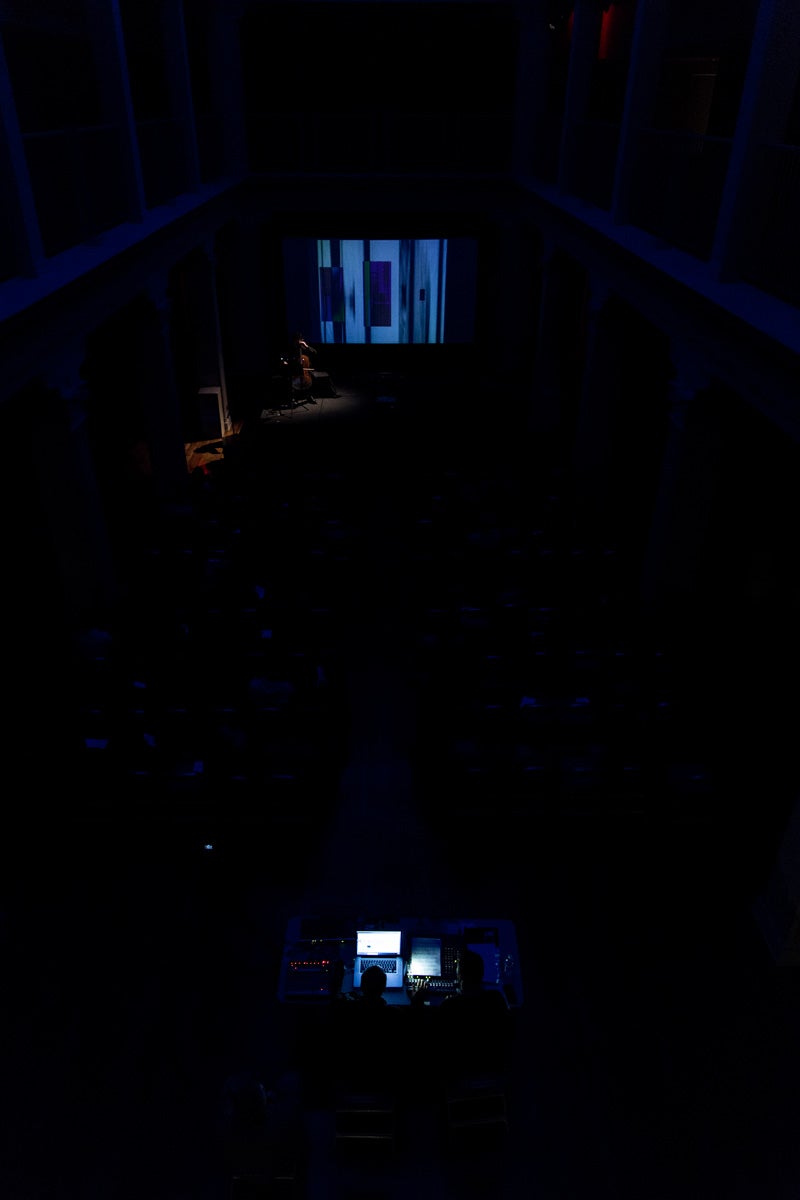 Premiere with dance on June 8, 2016 – Culver Center of the Arts (Faith Jensen-Ismay, dance)

Iconic Polyphony, a 45-minute work for piano and live-electronics (8-channel surround sound) by Paulo C. Chagas, was composed for the exhibit "Icons in Transformation" by the Russian artist Ludmila Pawlow and performed by Gary Barnett at that All Saint's Episcopal Church in Riverside. A second version of Iconic Polyphony with a new choreography conceived and performed by Faith Jensen-Ismay was premiered at the Culver Center.

Igor Kefalidis, Honored Artist of Russia, Professor of Composition, director of the Center for Electroacoustic Music of Moscow Tchaikovsky Conservatory, presented his compositions for electroacoustic media and instruments.

Workshop by the Duo Materiales
January 22, 2014 – Culver Center of the Arts

Concert by the Duo Materiales
January 23, 2014 – Culver Center of the Arts 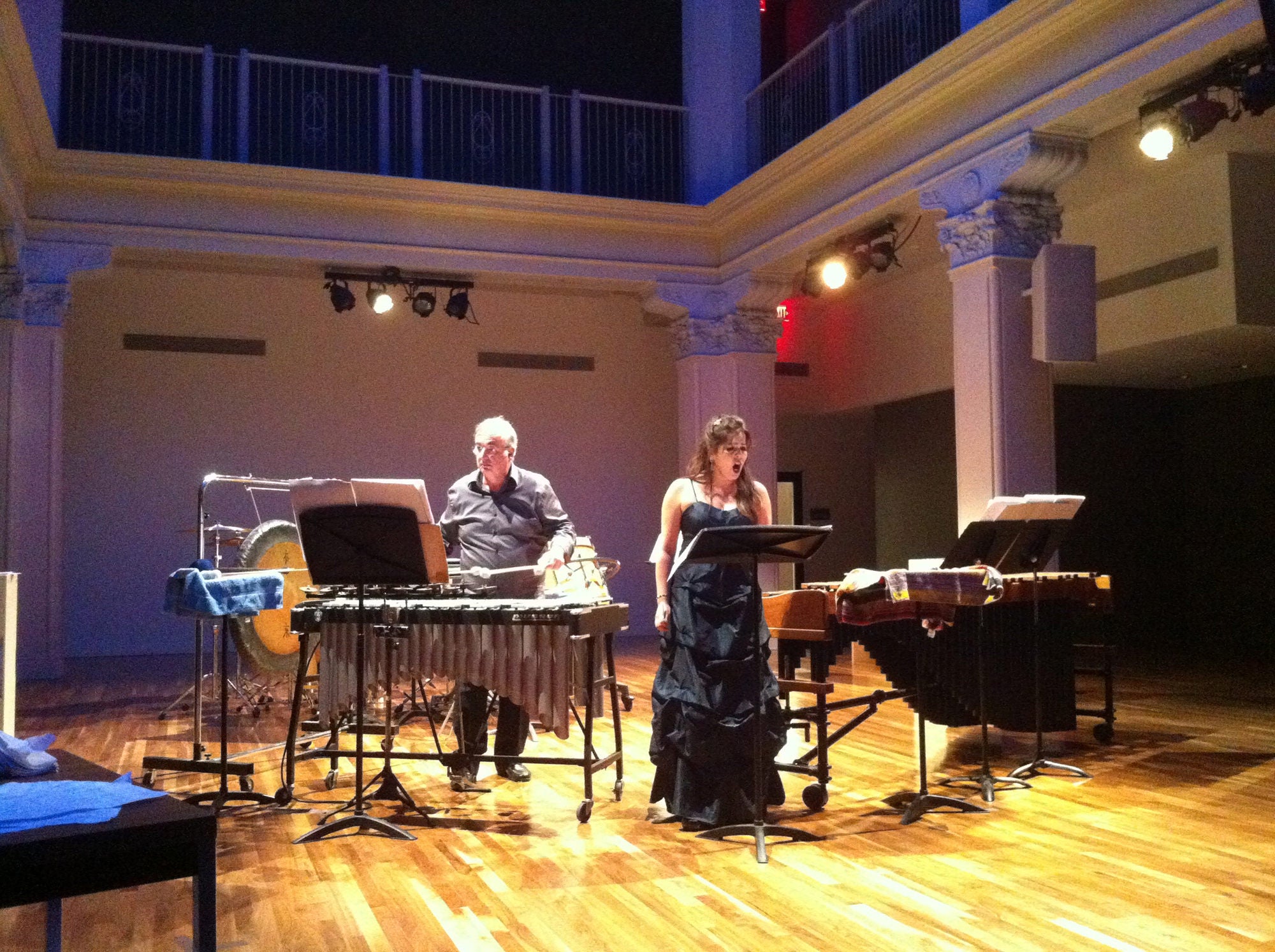 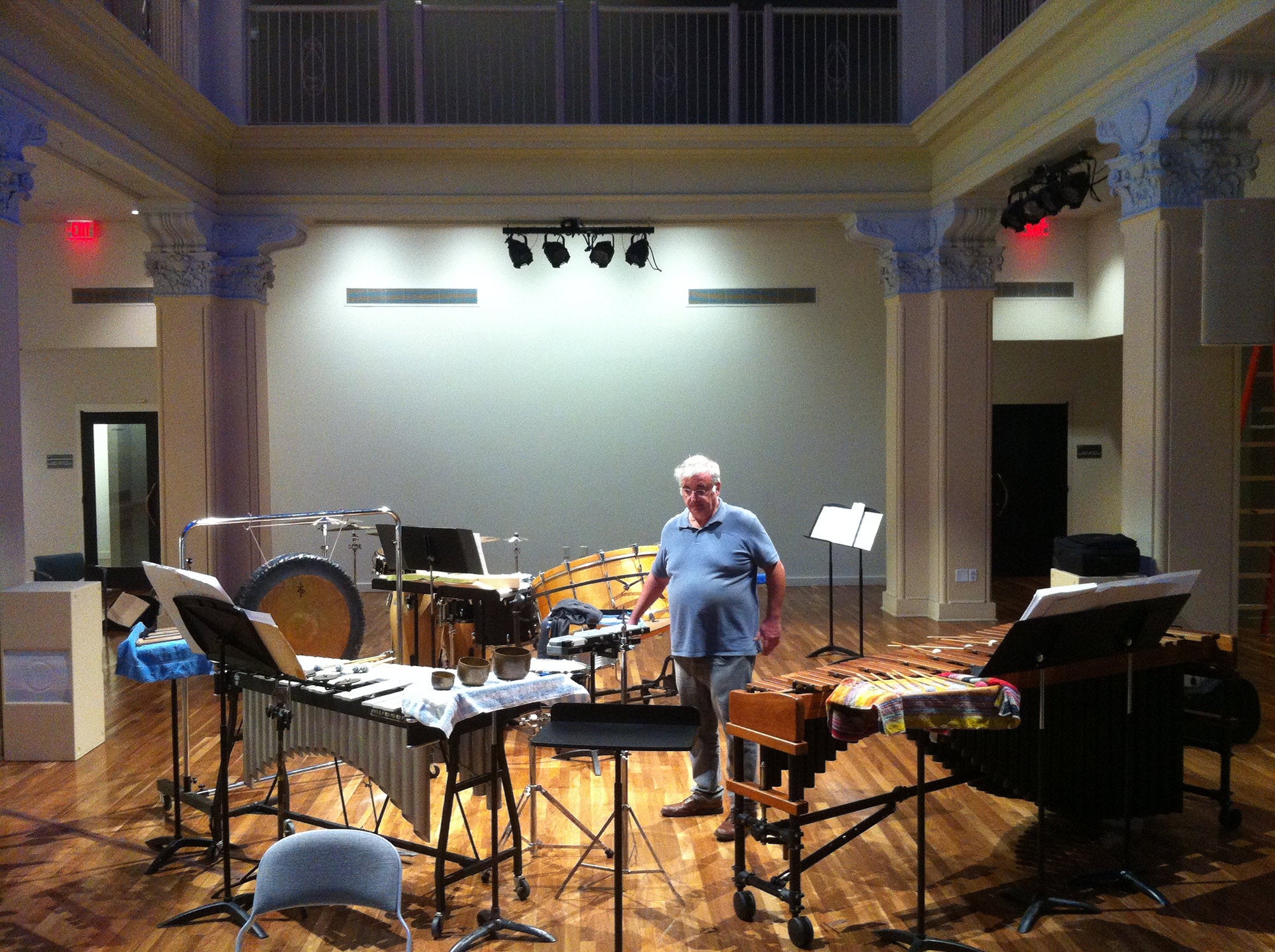 Mary Lou Newmark, electric violinist, composer and poet performed her music and discuss her compositional methods. As an artist of both music and words, Newmark continued to expand her creativity to include works for theater that combine the performing arts to explore social issues. 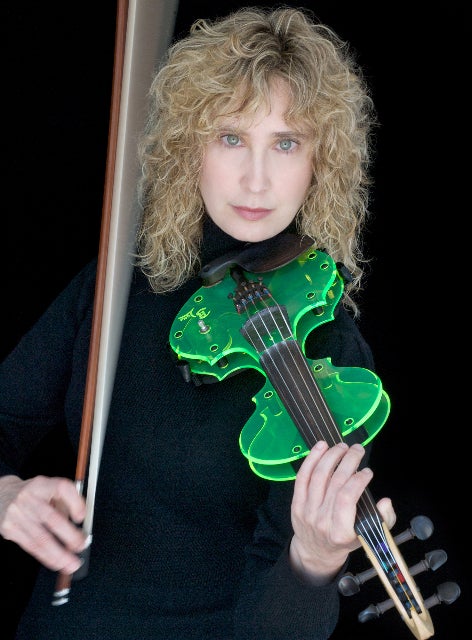 Guilherme Bertissolo spent a semester as visiting scholar at UCR (2011-09 to 2012-03) as part of his PhD research in Composition at the University of Bahia, Brazil. He conducted research at EARS and collaborated with UCR composers in many projects. Bertissolo’s research focused on Capoeira, a combination of dance and martial arts that has been developed in Brazil by West African slaves and its descendants and has been exported all over the world.

Sound Composer and Luca Forcucci and cellist Michael Kott presented their collaboration along with works by UCR graduate students. 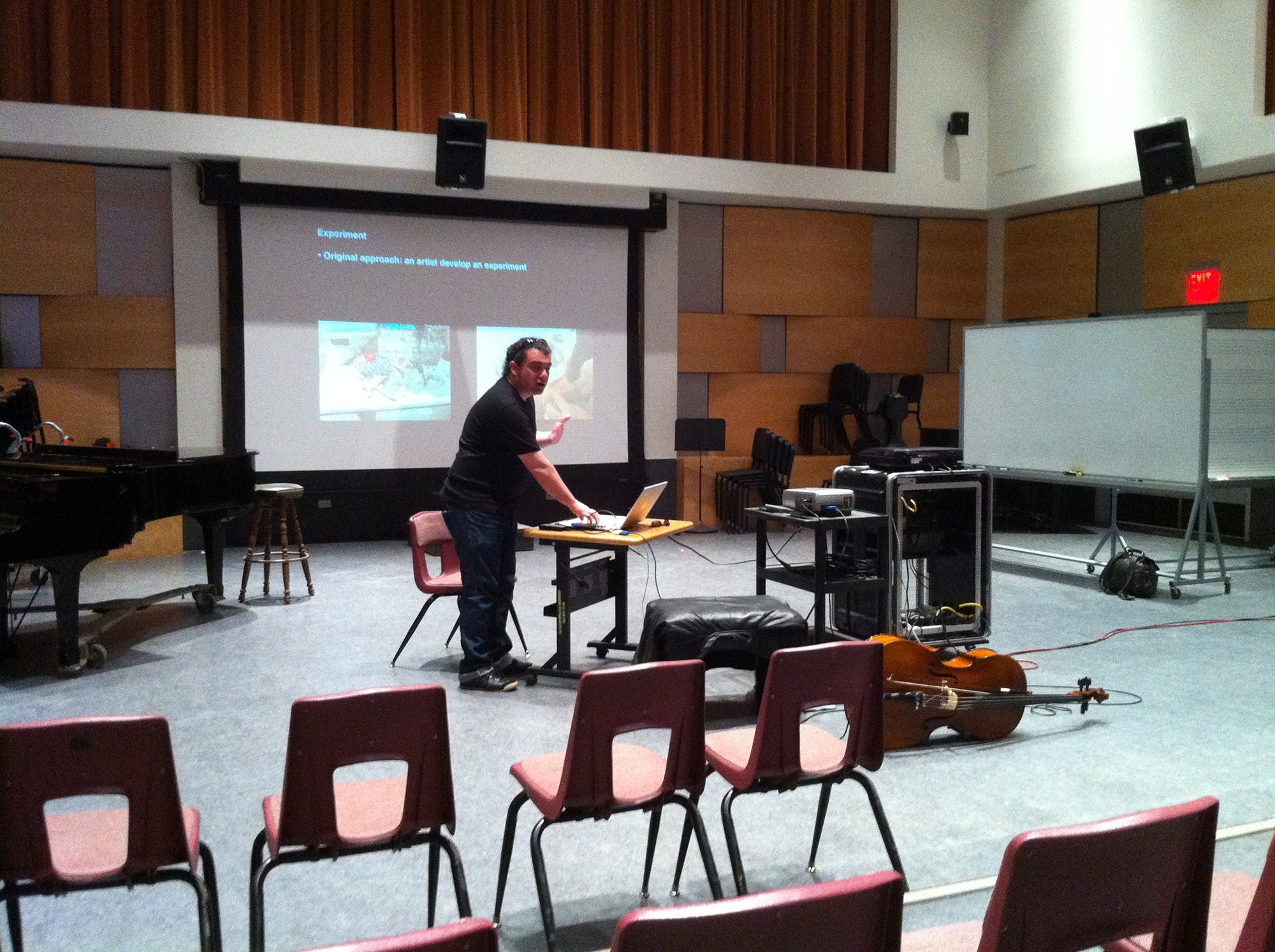 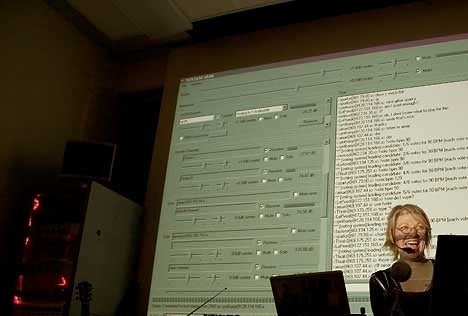 Very different concepts of "now" appear in network design and in human time perception, resulting in apparent paradoxes when we engage in temporally fine-grained actions such as playing music together over digital networks. What we expect to happen isn't always what we get, and the experimental data and qualitative experiences we are seeing in our work prompt introspection on the nature of time and hearing. What if we were to engineer a scheduler, or create artificial "music agents," using aspects of individual and ensemble temporal experience? Drawing on early work in time perception, and thinking forward towards advanced languages for media computing, this talk presented intersections between phenomenological approaches to time and hearing and some recent online experiences in distributed music performance.

The Sound of the Electromagnetic Real

The incursion of the electromagnetic into Western culture in the last quarter of the 19th Century made sounds in which were heard molecules, the start of electronic music, outer space and the universe. Many of them were composed by the earth and sun, with telegraph and telephone lines conducting. Radio was discovered before it was invented, and the enjoyment of noise was avant-garde.

Douglas Kahn is Professor at the National Institute for Experimental Arts at the University of New South Wales in Sydney, Australia. He contributed with many books to the study of sound and is currently researching Energies in the Arts.

The multidisciplinary symposium explored convergences among the arts, engineering, social and physical sciences and. It included a concert, video and sound installations, and a presentation of papers and abstracts by international scholars from a variety of areas such as acoustics, psychoacoustics, anthropology, psychology, semiotics, film studies, computer science, engineering, ethnomusicology, sound art, digital arts, and electroacoustic music.